Hesson apparently was not keen to coach any other international team but India.

Former New Zealand coach Mike Hesson has reportedly declined offers from the Pakistan Cricket Board (PCB) and Bangladesh Cricket Board (BCB), after being overlooked for the role of head coach of the Indian cricket team last week.

According to stuff.co.nz, Hesson did not apply for the vacant coaching positions with Pakistan or Bangladesh after missing the India role.

India’s Cricket Advisory Committee interviewed five applicants for the role of head coach on August 16, and Hesson was one of three shortlisted from that pool. It has been reported that India was the only international cricket team Hesson was keen to coach, and when that opportunity passed him by he declined the PCB and BCB offers.

Earlier this month, speculation grew over Hesson’s likely future with India, Pakistan or Bangladesh after he exited the Kings XI Punjab setup a day after the PCB sacked Mickey Arthur and his entire coaching staff. His name was linked as one of the frontrunners for the role of Bangladesh’s head coach.

Hesson, who coached New Zealand to the 2015 Cricket World Cup final, reportedly is not keen to coach an international team or give up his commentary role with Star Sports.

During his six-year tenure with New Zealand, Hesson guided the team to new heights across all three formats. Under his tutelage, New Zealand played 53 Tests for 21 wins and 13 draws and won 65 of 119 one-day internationals and 30 of 59 T20s. 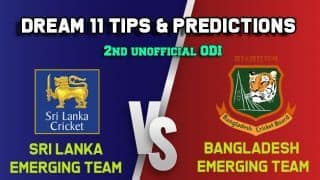