After being termed as outstanding by Justin Langer, the 23-year-old is hopeful of being considered for next summer s World Cup.

Ben McDermott, son of former Australia pace bowler Craig, is hopeful of finding a place in Australia s squad for the 2019 ICC Cricket World Cup despite a poor introduction to international cricket. McDermott, 23, made an unbeaten 10 in his T20I debut against UAE but was then run out in three successive matches during the 0-3 loss to Pakistan.

Scores of 0, 3 and 21 have not entirely dented his spirit, however, and as McDermott prepares to lead the Cricket Australia XI against the touring South Africans in Brisbane on Wednesday, he reflected on being run out thrice in a row.

“Just reflecting on those three run-outs, I was batting in the middle order and wanted to get off strike there was a bit of pressure there,” said McDermott, who is part of Australia s T20I squad for this weekend s one-off versus South Africa and three games against India.

“Maxi (Glenn Maxwell) was batting really well in the second game and I just had to get him on strike, and that was a risk I was willing to take hitting one to midwicket and (the fielder) having one stump to throw at. They were pretty good in the ring. But it was a great experience, I learnt a lot over there playing in different conditions, batting in different positions. Playing spin on those subcontinental wickets in the T20 format, I’ve never really done that before.”

McDermott won a maiden call-up in Australia colours on the back of a strong run of form for Tasmania in the recent JLT One-Day Cup. Scores of 56, 117, 28, 102* and 76 put him at second place at the time of his inclusion, which was second in the run charts behind Chris Lynn.

McDermott had turned the selectors heads during the previous Big Bash League, hitting 114 from 52 balls on the way to a tournament strike-rate of 145.78, which Australia s head coach Justin Langer acknowledged while unveiling the T20I squad last month.

Last week, McDermott was added to Australia s ODI squad as batting cover for Shaun Marsh, further indication of how highly he is rated. After being termed as outstanding by Langer, he is hopeful of being considered for next summer s World Cup.

“It should be in everyone’s mind you want to be involved in those big events,” he said. “(I feel) very confident with the way my game’s going in T20s in Australia. I’ve had some good performances in the Big Bash so hopefully I can take them into international cricket if I get the opportunity.” 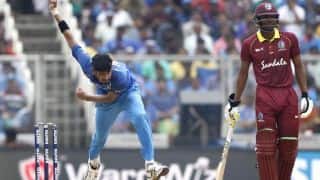