Farbrace joined the England staff in 2014 after guiding Sri Lanka to the World Twenty20 title that year.

England coach Trevor Bayliss will lose a key member of his staff ahead of the team’s home ICC Cricket World Cup 2019 and Ashes after it was announced Saturday that assistant coach Paul Farbrace will leave to join Warwickshire. (ALSO READ: Hopefully we can walk away with the ICC World Cup and Ashes trophy this year: Trevor Bayliss)

Farbrace, credited with helping kickstart England’s revival in one-day cricket, will succeed Ashley Giles as the sport director at Edgbaston after England’s tour of the West Indies ends next month.

Bayliss had already announced he was standing down as England head coach when his contract ends in December, leaving Farbrace facing an uncertain future.

Former Kent and Middlesex wicketkeeper Farbrace, who first worked under Bayliss when the latter was Sri Lanka coach, joined the England staff in 2014 after guiding Sri Lanka to the World Twenty20 title that year.

After England’s woeful early exit at the 2015 World Cup, which saw Peter Moores sacked as head coach, Farbrace took caretaker charge of the side before joining forces with Bayliss again. (ALSO READ: Farbrance wants Root to learn from Morgan when it comes to limited overs cricket)

The pair have since helped guide England to the top of the one-day international rankings and made them one of the favourites as they go in search of a maiden men’s World Cup title on home soil.

But Farbrace, 51, will not now see the job through, although he was confident the team would succeed without him.

“I have been fortunate to taste some genuine success and be part of the development of some excellent players, who have the world at their feet this summer,” said Farbrace in an England and Wales Cricket Board statement.

“I wish them every success. I believe they have the right attributes to create history by lifting the World Cup in July and winning the Ashes that follows it.

“There is never a great time to leave an international set-up and despite what will be a fantastic summer for English cricket, the opportunity to shape the future of one of the game’s biggest counties was too much to resist.

Giles paid tribute to Farbrace by saying: “Paul was integral, alongside, Andrew Strauss, Trevor Bayliss and Eoin Morgan, in transforming our white-ball strategy, which has seen us become the best team in the world leading into a World Cup year.” 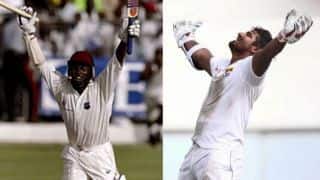