Pakistan's exquisite opener Ahmed Shehzad smashed his sixth T20I half-century, as they register a seven-wicket win over West Indies in the fourth T20I.

Pakistan‘s exquisite opener Ahmed Shehzad smashed his sixth Twenty20 International (T20I) half-century, as it was his knock that led the visitors to a glorious seven-wicket win over the hosts West Indies in the fourth and final T20I at the Queen’s Park Oval in Port of Spain, Trinidad on Sunday. With this win, Pakistan also claimed the series, as they won it 3-1. Apart from Shehzad, it was Baba Azam, who too played a steady and decent knock of 38 to ensure Pakistan’s series win, while for West Indies, it was nothing more than a reality check, as they have plenty of homework to do. FULL CRICKET SCORECARD: Pakistan vs West Indies 2017, 4th T20I at Port of Spain

Earlier, Pakistan skipper Sarfraz Ahmed won the coin toss and elected to bowl first, as West Indies managed to score an average total of 124 for the loss of eight wickets in the allotted 20 overs, with Chadwick Walton and skipper Carlso Brathwaite scoring 40 and 37, respectively; while Pakistan bowlers in the form of Hasan Ali and Shadab Khan claimed a couple of wickets each. As for Pakistan, they started off the chase in a good manner, only for Kamran Akmal to fall for 20, at the score of 40, off Marlon Samuels in the seventh over. It was followed by a 70-run stand for the second wicket between Shehzad and Azam, who sealed the fate for Pakistan. FULL CRICKET UPDATES: Pakistan vs West Indies 2017, 4th T20I at Port of Spain

During this course, Shehzad scored his 6th T20I half-century, before getting dismissed off the very next ball for 53, as Kesrick Williams bowled him up in the 16th over. At the score of 115, he was followed by Babar Azam, who fell for a decent 38 to Williams in the 18th over. Nevertheless, despite the late comeback by the Windies, it was too late for them, as the pair of Shoaib Malik and skipper Sarfraz made sure that they see Pakistan home, without any trouble. West Indies’s Williams was the top wicket-taker with a couple of scalps for 16. 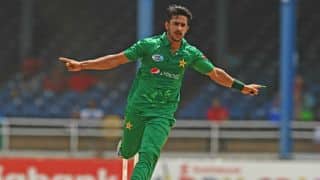