Talking about the World Cup, which begins with England's clash with South Africa at The Oval on May 30, Hales said he will still back his team-mates to win in his absence.

Alex Hales, who was dumped out of England’s ICC World Cup 2019 for consuming a recreational drug, is targeting the T20 World Cup in Australia next year for a potential England comeback.

“I hope the door is not closed, that’s one of my aims, that T20 World Cup,” Hales, who was present at the Caribbean Premier League (CPL 2019) draft in London on Wednesday, was quoted as saying by ESPNCricinfo.

“I’m going to go through the process, hopefully score some runs in these tournaments and see how we go. I want to enjoy my cricket. I think it’s a good opportunity,” he said of his status as a white-ball specialist.

“These tournaments now are well respected all around the world, particularly by the selectors and ECB. I’d love to use these tournaments to hopefully get back into the frame for next year.”

Asked whether it will be tough to watch England compete in the ICC World Cup 2019 from the sidelines at home in a tournament he was an automatic choice, the flamboyant batsman declined to comment.

Elaborating on his plans for the coming months, Hales added: “I’ve got a few things to do with the ECB, there’s obviously a process to go through, and then start training, I guess. Once I start playing again, the next 12 months will be really busy, so I will enjoy a mixture of some downtime, and then start getting prepared for the Blast by playing some second-team games for Notts.”

Talking about the World Cup, which begins with England’s clash with South Africa at The Oval on May 30, Hales said he will still back his team-mates to win in his absence.

“I will [be watching],” he said. “I am still a fan and I wish the boys the best. What we’ve done over the last few years is unbelievable, the guys deserve to win it, and I will be sat there watching and cheering.

“Apart from England, I’d say India [are favourites to win], but the way all teams are playing at the moment, you never know. It’s a really open tournament, I’m really looking forward to watching it.”

On England’s batting power, Hales said: “It’s everyone’s natural game, everyone has natural ways to be aggressive. We have got matchwinners all the way down to Adil Rashid at No. 11, It’s just hitters and hitters that keep coming at you. If one person doesn’t come off, another person will. It’s a really good, exciting line-up.” 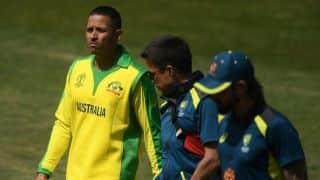 Cricket World Cup 2019: Usman Khawaja retires hurt after being hit by a bouncer but Australia beat West Indies in warm-up 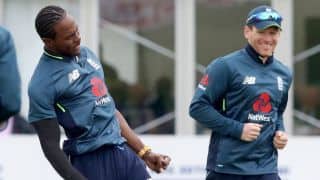