Anderson and Broad have together taken around 950 wickets for England. Botham feels they should be in the reckoning for next year's Ashes as they enjoy bowling against Australia

Legendary former all-rounder of England, Ian Botham opined that England should keep James Anderson and Stuart Broad in reckoning for Ashes 2019, provided both of them keep fit and have the zeal to bowl as they’ve displayed over the years. ESPNCricinfo reported that Botham wants the management to keep the England side fit and together keeping in mind the upcoming assignments including the ICC World Cup 2019 and the Ashes next year in England.

When asked about the prospects of Anderson and Broad, the former all-rounder who took 383 wickets and scored 5,200 runs for England at Test level said, “I’m not at all worried about them for this series (against India), in the long-term you’d have to think about it . Both of them would want to play against Australia after the World Cup 2019. They would be itching to have a go at the Aussies. Yeah! Most things start getting better with age..”

On the the impending transition in the England team with the prospect of both fast bowlers leaving at the same time, he said, “No.. You have to understand there is the world cup and then there is the series against Australia. England should look to keep that side together, keep that side fit. Provided they stay fit and they can bowl, why would you want to leave out two guys who’ve got around 950 wickets together? Also, they’ve got the wood over a couple of the Australian players and they would be very pleased not to see them in action. So, I won’t be thinking anything in this respect till after the Ashes.”

– Broad and Anderson’s bowling record against Australia in England:

In the three Ashes series that took place in England in 2009, 2013 and 2015, Broad and Anderson have played a major role in England victories as they have taken 61 and 44 wickets respectively through this period. Broad is currently at the 4th position in terms of leading wicket takers for his country in Ashes Tests played in England.

Botham himself is the all-time leading wicket taker in Ashes Tests in England for his country with 79 wickets in 18 Tests. He was instrumental in England’s victory in the 1981 Ashes, a series which eventually came to be called as Botham’s Ashes. 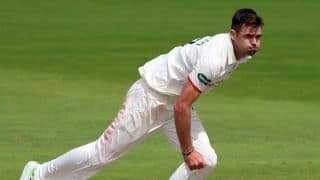