After losing two early wickets, Sri Lanka were provided hope by Angelo Mathews fifty at the end of Day Two of third Test.

After losing two early wickets, Angelo Mathews steadied Sri Lanka with his fifty on Day Two of third Test. The second session was affected by smog, forcing the Sri Lankan players to wear a mask.

India dominated thoroughly in the rest of the two sessions. Earlier, India had declared their innings at 536 for 7. Mohammed Shami and Ishant Sharma then picked up two quick wickets, while Ravindra Jadeja took the third in the final session. Sri Lanka were 131 for 3 before stumps, with Mathews (57*) and Dinesh Chandimal (25*) at the crease.

Kohli, who was unbeaten at 155 at the end of opening day, comfortably got to his sixth double-hundred. Rohit Sharma supported him, scoring his half-century in the process. He was removed for 65 just before lunch.

Ravichandran Ashwin joined Kohli at the crease as Sri Lanka cricketers took the field wearing masks. Soon, the Lankans started facing difficulties in breathing. Gamage as well as Suranga Lakmal had to go off the field. Chandimal and other cricketers kept on pleading to the umpires to pause the match. However, match referee David Boon consulted a doctor and concluded that play can continue. Ashwin’s stay at the crease was cut short by Lahiru Gamage as soon as play resumed.

However, the match was further interrupted by the Sri Lankans as their players started feeling uncomfortable. Kohli seemed frustrated by the continuous interruption and soon departed for 243, getting lbw off Lakshan Sandakan’s delivery.

Upon further interruption, India coach Ravi Shastri walked out in the middle to speak to the umpires. Nic Pothas also went out to have a word with the umpires soon after, as they were fielding with only 10 cricketers. Kohli, though unwilling, declared the innings.

Though Sri Lanka lost yet another wicket in the third session, Mathews’ half-century kept Sri Lanka’s hopes alive. Mathews built a 61-run partnership with Dilruwan Perera before the latter departed for 42, off Ravindra Jadeja’s delivery.

The second 50-run partnership of the innings was built between Mathews and Chandimal. India put up an usual display of fielding as two catches were dropped at slip, by Shikhar Dhawan and captain Kohli. 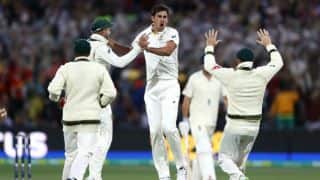 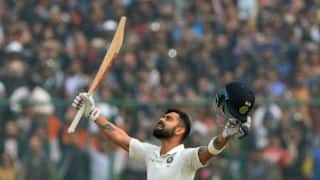