Arun Jaitley turned emotional in the Delhi High Court on Monday stressing that his reputation has suffered "irreparable damage" due to allegations of DDCA corruption.

New Delhi: Union Finance Minister Arun Jaitley turned emotional in the Delhi High Court on Monday stressing that his reputation has suffered “irreparable damage” due to allegations of corruption levelled by Delhi Chief Minister Arvind Kejriwal in the Delhi District Cricket Association (DDCA) case. Jaitley was present in the court of the Registrar General when Kejriwal’s counsel and senior advocate Ram Jethmalani was cross-examining him in a defamation case filed by the minister against the Chief Minister and five other Aam Aadmi Party leaders. Jethmalani, referring to a letter written by Jaitley to the Deputy Registrar seeking defamation proceedings against Kejriwal, asked him: “You [Jaitley] have used the word ‘goodwill’ in the letter filed along with the plaint. Are you aware about the difference between ‘goodwill’ and ‘reputation’?” DDCA defamation case: Arun Jaitley to appear before Delhi High Court

The Minister replied: “There are overlapping areas in the meaning of the two words and the counsel’s [Jaitley’s] letter dated December 21, 2015 in that sense uses them ‘interchangeably’.” Jaitley rejected Jethmalani’s suggestion that the words “goodwill” and “reputation” are “totally different”. Jethmalani then confronted Jaitley with Webster’s Comprehensive Dictionary and told him about the difference of the two words. However, the court as well as Jaitley’s counsel raised objection on Jethmalani’s question and said that a witness cannot be confronted with a dictionary.

Targetting Jaitley on the two words, senior counsel Jethmalani again asked whether the Finance Minister agrees that “men in power do good things for their friends and enjoy a lot of goodwill”, and that “reputation does not suffer from a defamatory statement as much as goodwill suffers”. The senior counsel also said that “goodwill is enjoyed by a crook who does good things for someone”. DDCA row: Arvind Kejriwal granted bail in Arun Jaitley defamation case

However, the Minister raised objection to the reference – which was allowed by the court observing that such questions did not have any relevance to the case. Jethmalani questioned Jaitley over the Rs 10 crore damage he has sought from Kejriwal, and asked: “You do not claim in this figure of Rs 10 crore that there is any loss of income or property [from Kejriwal’s defamatory statement]. What do you have to say?”

Jaitley answered that the “damage to his reputation has caused pain and mental distress”. Replying to Jethmalani’s query on “unquantifiable damage”, Jaitley elaborated: “I believe that considering my stature, background and reputation, the loss caused to me and my reputation was so enormous that it could be considered ‘unquantifiable’.” Arun Jaitley orders forfeiture of Chris Gayle to recover Vijay Mallya s unreturned loans

Jethmalani then posed: “It was your own personal feeling about your own greatness that it cannot be quantified in fiscal measure. What do you have to say?” Jaitley responded that his reputation is based on the opinion of his friends, well wishers and other people including media. Jaitley got emotional during the hearing, and also said that he countered AAP leaders’ defamatory statements, but when they continued with their allegations of corruption in DDCA he then filed the case alleging irreparable loss to his image.

“I never complain against political criticism, but for the first time personal imputation questioning my integrity were made,” he said. “It appears that defendants [Kejriwal and others] made defamatory statements against me immediately after the raid. Their effort was to deflect the attention from the raid and somehow link me to the controversy with which I have no connection,” Jaitley said during the cross-examination. Court allows Arun Jaitley’s plea to summon DDCA records

Jaitley’s statement, which was recorded by a joint registrar, came when Jethmalani told him that the raid was conducted on the office of Kejriwal’s former Principal Secretary Rajendra Kumar in December 2015 because documents related to Delhi and District Cricket Association (DDCA) were expected to be recovered.

In December 2015, Jaitley filed a civil defamation case against Kejriwal and Aam Aadmi Party leaders Kumar Vishwas, Ashutosh, Sanjay Singh, Raghav Chadha and Deepak Bajpayee, claiming that they made “false and defamatory” statements in a case involving DDCA, thereby harming his reputation. He claimed that AAP leaders had attacked him over alleged irregularities and financial bungling in Delhi’s cricket association, of which he was the president for about 13 years.

Jethmalani asked Jaitley whether he was aware that the Delhi government was appointing a commission to inquire into the controversy. Jaitley said he left the post in 2013. “I had no interest in the activity of this association, nor was I acquainted. I was not aware of any such inquiry.” The hearing will continue on Tuesday.

(Amiya Kumar Kushwaha can be reached at amiya.k@ians.in) 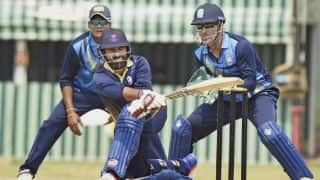 Parvez Rasool: Will like to play with another team if cricket does not improve in Jammu and Kashmir