Jonny Bairstow was named in the 13-man squad for the third Test against Australia.

Jonny Bairstow believes he is in the best form of his career after being handed an England recall ahead of the third Test against Australia at Edgbaston on July 29. Bairstow has been picked in place of dropped county team-mate Gary Ballance after making five hundreds for reigning champions Yorkshire in the County Championship where he averages over 100 so far this season. England have suffered a series of top-order collapses in recent matches and they could not get themselves out of trouble in the second Test at Lord’s, where Australia won by a crushing 405 runs to level the series at 1-1. READ: England drop Gary Ballance for Jonny Bairstow

Bairstow, the son of late former England wicket-keeper David Bairstow, now has a chance to improve on a modest Test average of 26.95 in 14 matches, the last against Australia in Sydney in 2014 when an England defeat meant they suffered a 5-0 Ashes whitewash. However, he made a match and series-winning 83 not out against New Zealand in a one-day international at Chester-le-Street last month.

“I am very pleased to have been called up. Consistency-wise I think I am in my best form and striking the ball well and hopefully this will continue. Playing international cricket is a great challenge but that is why we play the game. If you don’t challenge yourself you will never find anything out about yourself,” Bairstow, set to bat at number five for England, said Tuesday after being included in a 13-man Test squad. READ: Ashes 2015: England top-order a concern; Must rectify in time for 3rd Test at Edgbaston

Bairstow’s previous stints in international cricket have seen questions raised over his ability to play short-pitched bowling — something he is sure to face from the likes of Australia’s Mitchell Johnson, Mitchell Starc and Josh Hazlewood. But Yorkshire coach Jason Gillespie, a former Australia fast bowler, said Bairstow was now a much-improved batsman.

“It is important that those people who don’t watch much county cricket don’t pipe up with opinions based on his past experience in Test cricket because we’re talking about a different beast right now,” Gillespie wrote in his Guardian column. READ: The Ashes 2015: Trevor Bayliss hopes for livelier wicket in Birmingham

Ballance has an impressive average of nearly 48 in his 15-Test career but the left-hander has struggled this season, with only 134 runs in eight Test innings against New Zealand and Australia this season. The 25-year-old scored three hundreds and two fifties in his first 10 innings for England but has found scores harder to come by of late.

“He has scored a heck of a lot of runs over a short period of time But it is just one of those disappointing things and, hopefully, I will be able to get in and score runs. I have been very positive at the crease this season and will try and take that into the Ashes series. You cannot say how you will play until you are there but I will certainly relish the challenge,” Bairstow, also 25, said of Ballance. READ: Ashes 2015: Alastair Cook wants England’s top order to fire following rout in 2nd Test 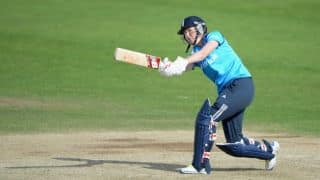 Ashes 2015: Alastair Cook's speech after England were set a 509-run target by Australia at Lord's