With Smith out of the Leeds Test having failed to overcome effects of a concussion, England sense blood.

There isn’t a shadow of a doubt that had it not been for Steve Smith, England would not have been 0-1 down in the Ashes 2019. On the contrary, they could have been 2-0 up for all you know had Smith not scored the twin centuries at Edgbaston. The only time England really threatened to beat Australia was during the final innings of the Lord’s Test, in which Smith, due to a concussion, did not bat.

But now, with Smith out of the Leeds Test having failed to overcome effects of a concussion sustained after being hit by a Jofra Archer bouncer, England are sensing blood. They have had not answer to stopping the Smith juggernaut, and with scores of 144, 142 and 92 in three innings, the former Australia captain could very well have been on the verge of making it “Smith’s Ashes”. That, however, will have to wait, at least till Manchester and at the same time, gives England a golden opportunity to level the series.

England announced an unchanged squad for the Leeds Test, indicating the management backs the XI that played at Lord’s. That said, coach Trevor Bayliss hinted that England might fancy reshuffling their batting order. Jason Roy has failed to show the same confidence in Tests like he has in ODIs and a demotion may be on the cards for the explosive right-handed batsman. He has scored just 45 runs in five knocks as an opener compared to an enterprising 72 in a solitary innings at number three. If the decision to send Roy in at No. 3 is taken, Rory Burns and Joe Denly will be up to face chin music against Australia’s pacers.

Speaking of which, Australia face a conundrum. They are yet to announce their 12-member squad but from the looks of it, Mitchell Starc looks set to get a game after undergoing an intense nets session Wednesday in Headingley. With Smith out, Australia may rely on their three pacers Starc, Josh Hazlewood and Pat Cummins to go all out with their pace attack.

Weather: Sunny and partially overcast across all days

Roy copped a blow to his head while receiving throwdowns from Marcus Trescothick raising questions over his availability. Ollie Pope was on standby for being a replacement if needed but fortunately for England, Roy did pass a concussion test ahead of match day. Sam Curran looks sure to sit this one out as well although the batting order might wear a different look.

In a forced change, Marnus Labuschagne is set to replace Smith in the line-up, although less than 48 hours after being hit by a bouncer from Jofra Archer in the 2nd Test at Lord’s, the allrounder copped another blow to the head. Labuschagne was struck by Starc in the nets yesterday but is likely to be up and running in time for Leeds. Australia may also consider resting either Cummins or Siddle to manage their workload and call Starc back.

“We think we’ve got the best seven batters available to us at the moment in England whether we can change it round and make that (order) any better, I’m not sure, but we’ll certainly have a discussion about it.” – England coach Trevor Bayliss

“We’re here to win the Test match, not to see how many bruises we can give. That’s not winning Test matches, trust me. You can’t get out with a bruise on your arm.” – Australia coach Justin Langer 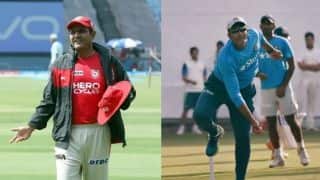