Harmer has played five Tests for South Africa before joining Essex in 2017 as a Kolpak player.

England were clueless on to get rid of Steve Smith, who’s twin centuries in the first Ashes 2019 Test paved the way for a historic win at Edgbaston. Now, ahead of the second match at Lord’s on Thursday, Joe Root‘s side don’t just have the problem of Smith, who made a fine return to the Test arena after serving his 12-month suspension, but also have to combat the threat of Nathan Lyon.

Offspinner Lyon became the fourth Australia bowler to claim 350 or more wickets in Test cricket. He picked 3/112 in England’s first innings at Edgbaston and drew an edge off allrounder Ben Stokes in the second dig to pick his fourth and 350th wicket. The 31-year-old then dismissed Moeen Ali to claim his 15th five-wicket haul too. He finished with figures of 6/49 as Australia recorded a big 251-run win to take 1-0 lead in the five-match series.

According to a report in The Telegraph, England have sought the services of former South Africa spinner Simon Harmer, who was seen bowling at the batsmen during the net session on Monday. Harmer in his third season as a Kolpak for Essex was drafted in by England to replicate Lyon’s spin. And with Moeen dropped, the need for a spinner in the nets was imminent.

Harmer has played five Tests for South Africa before joining Essex in 2017 as a Kolpak player. He has taken almost 200 first-class wickets for Essex and averages just 18 this season.

The Pretoria-born spinner could play for England once he completes the mandatory four-year qualification period, but England maintained that was not the reason he was drafted in for the net session at Lord’s.

Australia too followed the same strategy as England when they roped in a left-arm spinner from UAE to replicate Jack Leach‘s spin. Leach, who may make his Ashes debut at Lord’s, has been added to England’s 12-man squad after Moeen was dropped following his struggles at Edgbaston.

ALSO READ: ‘Absolutely impossible for England to come back in the Ashes’

Leach last appearance in Test cricket was not so long ago when his career-best 92 as a nightwatchman last month helped England recover after a first innings collapse saw them being skittled for 85 against Ireland. 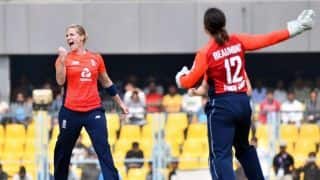