Roy has the ability to seal the opening spot and can dismantle Australia's formidable bowling attack, believes Hoggard.

A lot of expectations have been pinned on England‘s World Cup 2019 hero Jason Roy, who is all to make his Test debut in the Ashes 2019 beginning with the first match at Edgbaston on Thursday.

After Andrew Strauss retired in 2012, former England captain Alastair Cook got through a dozen opening partners of his own before calling time on his Test career last year, but Roy has the ability to seal the opening spot and can dismantle Australia‘s formidable bowling attack, believes Matthew Hoggard. “Jason has got every chance to succeed in Test cricket,” Hoggard told Metro.co.uk on Tuesday.

“He doesn’t open for Surrey when he does play for the county, and it’s a different mentality in red-ball cricket. But he’s got the technique to score runs in any format. He’s just got to come up with a game plan that suits him and make sure he’s clear in that. Whether he’s trying to hit the first ball back over the bowlers’ head, or play himself in, he needs a game plan which he’s happy with and which he can depend on at Test level that will be the key for Roy.

Roy scored 77 runs on his Test debut at Lord’s last week as England recovered from being bowled out for 85 on the first morning to beat Ireland in their one and only red-ball match between the World Cup and Ashes. The 29-year-old enjoyed a dream run at the ICC Cricket World Cup 2019.

“We all know what he can do in one-day cricket and it will be exciting to see how he does either way in Tests,” he said. (ALSO READ: James Pattinson and Usman Khawaja confirmed for Edgbaston Test)

Meanwhile, England are faced with a pleasant selection headache. While Test stalwarts James Anderson and Stuart Broad are expected to line up for the hosts on Thursday, there’s also the dependable Chris Woakes and the attacking option in Jofra Archer, who took 20 wickets during the World Cup after only making his international debut in May.

“England have a great bowling attack,” Hoggard, who took 16 wickets during the fabled 2005 Ashes series, added.

“To have your two leading wicket-takers in history in the team is certainly a bonus! The selectors have got a problem, though. They can’t fit all the bowlers in. If everyone is fully fit they have a big, big choice to make. Anderson and Broad are legends, with their experience of playing in huge matches I can’t see them being left out. They both play for me. But then do you go with Archer or Woakes? The attacking option is Jofra. But every time Woakes plays he does brilliantly. He never lets England down.

“It’s going to be a hard choice. But it’s a good headache to have for the selectors and there’s five Tests in six weeks now so all the bowlers will get a chance. They will all need to step up at some point.” (ALSO READ: Five potential Ashes stars)

Hoggard reckons that whichever bowling attack England opt for, it will cause problems for the tourists.

“Australia look very strong up top with David Warner and Steve Smith back in the team. Joe Root will be desperate for England to take wickets with the new ball because then they can get into Australia’s vulnerable, inexperienced middle order. That won’t be easy though as Warner has been in great form,” Hoggard explained.

“This is a big week. The World Cup is over and done with and now it’s on to the Ashes. England have a great record at Edgbaston and there’s always a fantastic atmosphere in the ground so there’s plenty to look forward to.” 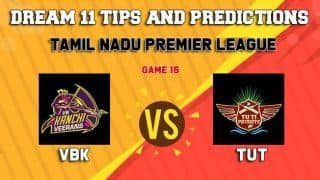