The selectors have a few headaches going into the three-day tour match versus Derbyshire.

Australia head coach Justin Langer has not guaranteed spots in the team’s starting lineup for the fourth Ashes Test match next week, as the tourists move from their one-run loss to England at Headingley on Sunday into a tour game later this week.

With the Ashes series now levelled after Ben Stokes’ exceptional unbeaten 135 in a record chase of 359, Australia have to find a way to prevent the home team from taking the lead at Old Trafford in the fourth Ashes Test.

“One thing I do know is we’re not batting well enough at the moment,” Langer told reporters on Monday. “I said at the start of the series that the team that bats best will win the Ashes. We’re certainly not at our best with our batting at the moment. We’ve got some real questions to ask for the practice game and then the fourth Test match.”

The next Test against England starts September 4 at Old Trafford, and before that the Australians play a three-day match versus Derbyshire from Thursday. Steve Smith is set to feature in the game after missing the Leeds Test after he was concussed by Jofra Archer at Lord’s, and should he be passed fit for Old Trafford it would mean dropping one batsman.

The rookie Marcus Harris replaced Cameron Bancroft for the third Test, and made 8 and 19 as opener. The other candidate to be dropped, should Harris be retained, is Matthew Wade who after his second-innings hundred at Edgbaston has made 6, 1, 0 and 33.

Marnus Labuschagne – who came into the series at Lord’s as international cricket’s first concussion substitute – has batted thrice in the series and crossed 50 each time. The joint vice-captain Travis Head has one fifty from six innings, but should keep his place for Old Trafford.

“Uzzy’s played a lot of cricket (and) he averages over 40 in Test match cricket,” Langer said. “He got a Test hundred seven innings ago so we know he’s a very good player. And he, like the rest of them, will be working hard to be ready for the fourth Test.”

Who gets the nod for the Derbyshire match is a headache for Langer and the Australian selectors.

“We can’t fit them all in, that’s one issue we’ve got,” said Langer. “We’ve also got to work out after a long summer, we’re going to have to rest some players, just to give them a mental freshen up more than anything.

“We’ve got two back-to-back Test matches to win or lose the Ashes we’re going to have to give guys time to freshen up. They’ve been here for Australia A or the World Cup and sometimes the mental breaks is as important as anything.

“So they’re the questions that will be asked – who do we give a break to? Who do we play? All those sort of things we’ll have to ask.” 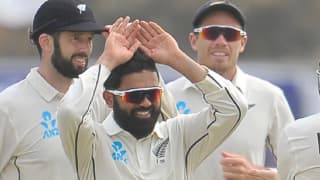