Spin great Shane Warne on Tuesday backed Nathan Lyon to surpass his Test-wicket haul of 708 to become Australia‘s leading wicket-taker in the longest format of the game.

The off-spinner, who recently surpassed Dennis Lillee to become Australia’s third highest wicket-taker behind Warner and Glenn McGrath, has 357 wickets against his name after the conclusion of the third Ashes Test in Leeds.

“I think he (Lyon) is a chance,” Warne was quoted as saying by cricket.com.au. “If you do the stats if he plays another 85 or 90 Tests, and takes four wickets per game, that’s 360 wickets so he’ll get me.

“As long as his hunger is there for the game, if he’s still enjoying the game.

“I’d love to watch someone get my record, that would be fantastic because it would mean they’ve done bloody well for Australia for a long period of time.”

“Hopefully I’m still alive to see it I’m 50 this year because I’d love to present him with a bottle of wine and say well done,” added Warne.

Warne made it clear that a lot of things will have to go right for Lyon to get past the landmark before adding that comparatively “the less stressful” style of spin bowling – off-spin – may see Lyon top the charts.

“Spin bowling is still always taxing on your body. Off-spin is probably if there is an easier form of the game on your body the less stressful,” said Warne.

“You still get tired, it still hurts, but compared to fast bowling, leg spin and all the other forms of bowling, it’s probably the easiest on your body. Which is even more of a testament to ‘Lyno’, because he’s really only got an off-break and a straight one.”

ALSO READ: Lyon will feel terrible, up to his team-mates to get him up: Ricky Ponting

“A lot of the other offies that we’ve seen Harbhajan (Singh from India), Murali (Muralitharan from Sri Lanka), Saqlain (Mushtaq from Pakistan) these guys had doosras and all sorts of other deliveries,” added Warne.

“Nathan’s got the traditional old off-spinner, and a straight one. So he’s very clever, he thinks about the game well, and hopefully his body holds up, which it should,” concluded Warne. 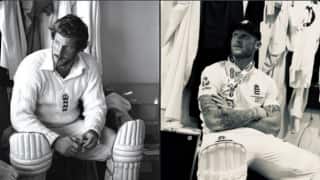