Extreme wind conditions at Old Trafford led to the bails being blown out of their grooves.

The rare instance of wind disturbing the bails to the extent that the on-field umpires had to remove them during day one of the fourth Ashes Test at Old Trafford did not deter Australia allrounder Marnus Labuschagne from scoring his fourth consecutive half-century, but the bizarre scenes did leave him surprised.

On a rain-hit and blustery Manchester day, strong winds led to the bails being blown out of their grooves, temporarily removed by the umpires and then replaced by heavier ones, and at one stage empty packets of potato chips also blew onto the field of play.

Through such never-seen-before scenes, Labuschagne – batting at No 3 in place of the dropped Usman Khawaja – scored 67 to help Australia to 170/3 at the close of play Wednesday.

“It was probably frustrating for everyone, because the one where I pulled away I thought the bails fell off, so I looked back and the bails were still on,” he told reporters after stumps. “Then I had to pull away when the chip packets kept coming past and the beach ball.

“It was probably just frustrating for the game in general. They’re just getting frustrated because we have to pull away because there’s stuff there and the bails. When they (umpires) put the bails on you could just see the stumps shake and it was just a matter of time before they came off.

“It was very windy out there. I’ve never played a game where you’ve played with no bails, so that was very different. All in all, it was pretty tough conditions for bowling out there.”

Labuschagne, 27, has been a revelation for Australia in the Ashes. He batted in their second innings of the Lord’s Test after Steve Smith was concussed – as international cricket’s first-ever concussion substitute – and made 59. At Headingley, Labuschagne scored 74 on day one and 80 on day three.

“Today the conditions, the wind, it was tough to get used to it and get consistent with your movements because it was so windy and there were so many distractions around the ground,” he said. “It doesn’t really matter how you get the runs, it’s just about the score. It was important for us to dig in and get a first innings score because there’s some spin out there and that’s really good for us.” 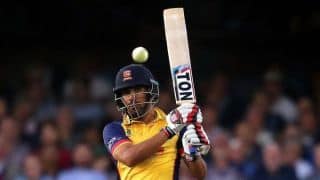