Archer's inclusion would give England a genuine cutting edge as the Sussex speedster can exceed 90 miles per hour with the ball.

England captain Joe Root said Tuesday that he has no qualms about launching self-assured fast bowler Jofra Archer‘s Test cricket career in the cauldron of an Ashes 2019 clash at Lord’s.

The 24-year-old Barbados-born quick seems certain to be handed his first Test cap on Wednesday in place of the injured James Anderson as the hosts look to get back on level terms with Australia after a 251-run humbling in the first encounter at Edgbaston.

If selected, Archer will be making his Test debut on the ground where he bowled the decisive Super Over that sealed England’s ICC Cricket World Cup 2019 final win over New Zealand last month.

READ: Smith is in the league of Tendulkar, Kohli and De Villiers: Rogers

“And, as he made very clear, it’s his preferred format so again I’m very excited to see at the start of his journey.

“If anything, it will motivate him and when he gets the chance he will be desperate to prove to everyone how good he is. That’s what you want and he won’t shy away from the challenge.”

Archer’s inclusion would give England a genuine cutting edge as the Sussex speedster can exceed 90 miles per hour (145 kilometres per hour) with the ball.

But Australia’s batsmen are used to fast bowling and several members of their side have played against Archer at the recent World Cup or in Twenty20 franchise cricket.

“A lot of our guys have seen Jofra or faced him, which is a plus,” said Australia captain Tim Paine.

“It’s been in white-ball cricket but we’ve actually faced him in Australia where conditions suit fast bowling.”

“We’ve seen him at his fastest, they know what to expect, they know how skilful he is and how good he is. Like most bowlers that play Test cricket there will be times where he’s going to be a real threat and we’re going to have to weather that.”

Root said left-arm seamer Sam Curran could feature at Lord’s after Moeen Ali was dropped, although the England skipper stopped short of naming his XI a day in advance. “Sam is a brilliant talent and can change the game with bat and ball,” said Root.

“His record is fantastic and he has had a huge impact in most of the games he has played and is a promising young talent who I’m sure will play a huge amount of Test cricket.” 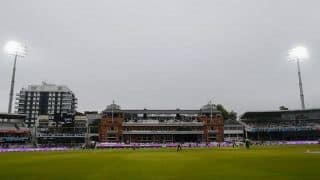