Usman Khan s three-wicket burst in a single over in his second spell meant, Hong Kong were bundled out for 116, the lowest-ever total in an ODI in Dubai.

Hong Kong skipper Anshuman Rath conceded that his team failed to put up any sort of fight against Pakistan in their opening fixture of 2018 Asia Cup, which they lost by eight wickets Dubai International Cricket Stadium, Dubai on Sunday.

There were a lot of soft dismissals and 120 is not good enough, said Rath during the post-match presentation.

At the end of the day we wanted to put up a fight and today we just didn’t try. Early on, it (ball) did swing a bit and there was bounce too. We did get a start, but we didn’t convert it in the middle overs. Not a good enough total. Credit to the Pakistani bowlers, he said.

After opting to bat first, Hong Kong found the going tough against Pakistan seamers and were tottering at 44 for 5 before Aizaz Khan (27) and Kinchit (26) took the total near the triple-figure mark. However, Usman Khan s three-wicket burst in a single over in his second spell meant, Hong Kong were bundled out for 116, the lowest-ever total in an ODI in Dubai.

Spinners (Ehsan and Nadeem Ahmed)were top class, but we didn’t score enough to give them support, he said, adding that it was great to face a top team like Pakistan, Great to go out there and face them .

Pacer Usman Khan was adjudged Man-of-the-Match for gis three for 19. Hong Kong will next face India on September 18, while Pakistan face their arch-rival a day later. 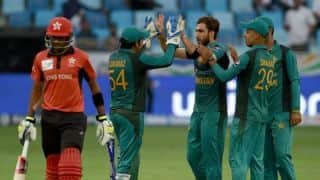 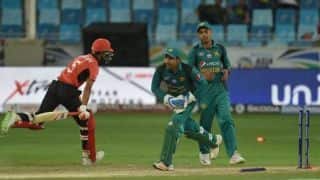