With both Haq and Zaman departing inside the first five overs, Pakistan s inexperienced middle-order was exposed they were eventually bowled out for 162.

Former India player Sanjay Manjrekar reckoned that Pakistan openers – Imam ul Haq and Fakhar Zaman – got out playing T20 shots and lost the plot against India in Match 5 of the 2018 Asia Cup at the Dubai international Stadium, Dubai on Wednesday.

With both Haq and Zaman departing inside the first five overs, Pakistan s inexperienced middle-order was exposed and they were eventually bowled out for 162.

Looking at the recent Pakistan performances you would have thought that the openers would take their time (to settle in), said Manjrekar on ESPN cricinfo, adding, Today, two in form batsmen, looked in a lot of hurry. The kind of shots they were playing it looked they tried to exploit polit the first 10 overs, that was not understood. They got out playing T20 shorts .

Bhuvneshwar Kumar removed both the openers and after a lacklustre return from injury against Hong Kong a day earlier, the UP bowler, got back in the thick of things with a good performance and Manjrekar said that Pakistan openers choose the wrong bowler to go after.

wrong bowler to take on, said Manjrekar, adding, , Bhuvneshwar is a seasoned player and the platform wasn t laid and after that it was too late for Pakistan to comeback.

Imam, who scored an unbeaten 50 against Hong Kong, charged down the track to Bhuvneshwar in the third over and edged a short delivery to wicketkeeper MS Dhoni. An over later, Zaman took on another short one from Bhubaneswar only to miscue inside the ring. 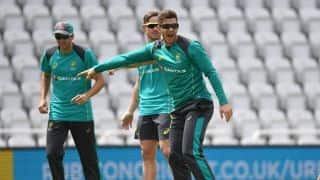