Shoaib Malik top-scored with 78, hitting a second consecutive century, but India restricted Pakistan to 237/7 in their second match of the Super Four stage of the Asia Cup 2018.

Shoaib Malik top-scored with 78, hitting a second consecutive century, but India restricted Pakistan to 237/7 in their second match of the Super Four stage of the Asia Cup 2018 at the Dubai International Stadium on Sunday.

Pakistan were off to a slow start after opting to bat. The opening pair of Fakhar Zaman and Imam-ul-Haq looked determined to eke it out against an Indian attack that got rid of them inside five overs the last time they clashed during the tournament. However, just when it looked the duo had settled in, Yuzvendra Chahal trapped Imam lbw on 10. The umpire had initially turned down the appeal but MS Dhoni nodded his captain Rohit Sharma to take the review and the decision was overturned.

Zaman, who registered consecutive ducks in his last two matches, slugged it out before opening up with a six and a four off Kuldeep Yadav. However, as he lined up for sweep, he lost his balance and slipped, resulting in him being adjudged lbw on 31. He opted against the review but as replays later showed, the ball may have brushed his glove before hitting the pad.

A mix-up involving Sarfraz Ahmed and Babar Azam resulted in the latter being run-out on 9. Pakistan were struggling at 58/3 when Shoaib Malik walked in.

Against Afghanistan, during a stiff chase, Malik revealed his aim was to bat till the end. He followed that template in Dubai too. Riding the nervy phase, in the company of Sarfraz, he first took Pakistan to three figures in 27.1 overs. And then in the same over, broke the shackles with six over deep-midwicket.

A drive and cut off Kedar Jadhav for two fours from Malik were enough for Rohit to pull him out of the attack. Malik went on to complete his half-century off 64 deliveries his second straight of the tournament and 43rd in ODIs.

Soon the duo raised a century stand and looked in prime position to lead a late flurry. A six off Jadeja from Malik signalled a shift in gears. However, Sarfarz, looking to up the ante, holed out at extra cover on 44 off Kuldeep.

New man Asif Ali then clobbered a two sixes and a four off a Bhuvneshwar Kumar’s over. Pakistan creamed 22 runs from the over. With the momentum firmly in the opponent’s favour, Jasprit Bumrah was brought back into the attack and he struck with the big wicket of Malik, out caught behind on 78.

India managed to pull things back in the final overs with Chahal cleaning up dangerman Asif on 30. Bumrah ensured Pakistan were restricted to 237/7 as he finished with figures of 2/29 in his 10 overs. 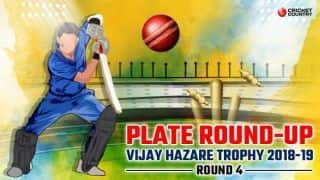