Patterson scored centuries in both innings playing for the Cricket Australia XI against Sri Lanka in Hobart last week.

Australia have named debutants Kurtis Patterson and Jhye Richardson and recalled opener Joe Burns for the first Test against Sri Lanka beginning in Brisbane on Thursday.

Patterson scored centuries in both innings playing for the Cricket Australia XI against Sri Lanka in Hobart last week, prompting selectors to call him into the squad.

West Australian fast bowler Richardson, who was impressive in the ODI series against India, comes in for the injured Josh Hazlewood.

Selectors resisted the temptation to blood 20-year-old batsman Will Pucovski, who many are touting as the next Ricky Ponting, opting instead for the experienced Burns.

Burns, 29, played his last Test against South Africa in April last year but has three Test centuries to his name. 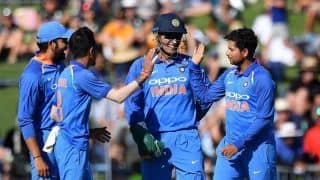