Australia have won the three-match T20I series 2-0 against South Africa.

Australia thrashed South Africa by six wickets to win the third and final Twenty20 International at Centurion on March 14, 2014. Australia have won the three-match T20I series 2-0. They were chasing a target of 129 set by South Africa. Aaron Finch top-scored with 39 and Shane Watson scored 35. Imran Tahir took two wickets, but Australia won the match in the 15th over.

It is Australia who will take confidence from the series win into the ICC World T20 2014 starting in Bangladesh from March 16. The run-chase began on a very positive note as both Finch and Cameroon White scored boundaries with ease. They made merry of the low total, even on a slow pitch. White had in fact replaced David Warner in Australia’s starting XI. The openers shared a 43-run partnership with a run-rate of only 8.89.

Left-arm pacer Wayne Parnel then struck in the fifth over. He bowled a bouncer and White did not get enough distance on his upper-cut and Tahir took the catch at third-man. Finch and Watson then scored 24 runs for the second wicket. Finch was connecting with the ball with pristine timing. Almost all of his shots were accompanied with the sound of the ball hitting right at the middle of the bat.

But after punishing the South Africn bowlers for a while, Finch gave a catch to David Miller at deep mid-wicket to hand Tahir his first wicket. Watson and Glenn Maxwell then shared a 38-run stand for the third wicket. Watson smashed two sixes in three deliveries of one over from Albie Morkel. The first one was launched way into the crowd and that brought a big smile on Watson’s face. The second one was straight down the ground.

Maxwell too hit two fours, but was out LBW to Beuran Hendricks for 17 off 20 deliveries. Watson departed soon to Tahir as he gave a catch to Faf du Plessis at cover. But it didn’t stop the Australians as Bailey and Brad Hodge combined for the fifth wicket and scored 22 runs in 11 deliveries. Both struck one six each as Australia own the match and the series. Bailey finished on 12 and Hodge on 11.

Earlier, Australia captain George Bailey won the toss and elected to bowl first on a slow track. The South African batsmen were never in the groove as the Aussie bowlers kept them under control. The bowlers took wickets at regular intervals as South Africa crawled to 128 for seven. Quinton de Kock top-scored with 41 off 40 deliveries with two fours and two sixes.

The next highest score was 18 off 11 deliveries from Albie Morkel. He struck two sixes before being bowler by Mitchell Starc. The eighth-wicket stand between Wayne Parnell and Hendricks was worth 25 runs. Starc, Glenn Maxwell and Brad Hogg took two wickets each. The score did not not look enough to defend and Australia easily chased it down with five overs to spare.

Man of the Match: Mitchell Starc 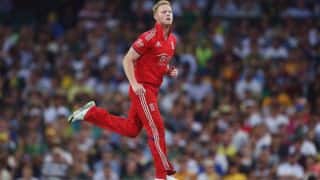 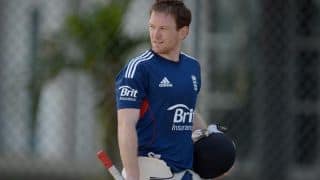