The Australia selectors have decided to rest Test skipper Tim Paine for the three-day tour game versus English county side Derbyshire from Thursday.

Usman Khawaja will lead Australia in place of Paine and Alex Carey will shift from T20 duty with Sussex into the wicketkeeper’s role in the tour fixture.

Carey has been in strong form for Sussex in the ongoing Vitality T20 Blast, scoring 256 runs from seven innings at a strike-rate of 151.47.

(READ: Don’t think Archer has edge over me: Steve Smith)

Two Ashes Tests remain, with the fourth match at Old Trafford from September 4.

Steve Smith will return to action with this match versus Derbyshire, having been concussed at Lord’s by Jofra Archer. He did not play the third Ashes Test at Headingley which England won by one wicket to level the series. 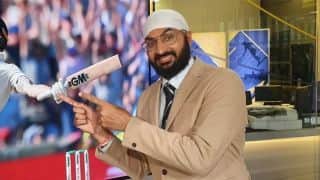 England's Monty Panesar to play in the Ranji Trophy for Puducherry?