"I am embarrassed to be sitting here, to be perfectly honest with you." - Steven Smith

Hobart:“Embarrassed” skipper Steve Smith said Australia needed a shake-up but backed under-fire coach Darren Lehmann after the hosts slumped to a humiliating series defeat to South Africa on Tuesday. Eight wickets fell for 32 runs as Australia went down by an innings and 80 runs before lunch on the fourth day of the rain-hit second Test, their fifth straight loss in the format. It followed an inglorious rout of 85 in the first innings, and a 10-86 batting collapse in the first innings of their comprehensive first-Test loss in Perth. Ashen-faced Smith told reporters he was humiliated by the manner of Australia’s abject surrender, and said something had to change ahead of next week’s day-night third Test in Adelaide. FULL CRICKET SCORECARD: Australia vs South Africa, 2nd Test at Hobart

“I am embarrassed to be sitting here, to be perfectly honest with you. Too many times we have lost wickets in clumps, 8/32 today, 10/85 in the first innings,” Smith said. “And it is happening way too consistently for my liking. We are not being resilient, we are not willing to tough it out and get through tough periods… it is not good enough,” added Smith. Smith, who remained 48 not out in the first innings shambles and scored 31 at his second visit to the crease, foreshadowed selection changes as Australian cricket grapples to fix its demoralised national team.

“It is not working. So, obviously on the back of five losses there is going to be a lot talked about in regards to selection and things like that,” the 17-Test skipper said. “We’ve got to start finding a way to turn things around. Whether the ball is seaming or spinning or swinging we don’t have an answer at the moment. We are not resilient enough, we are not digging in enough, we are not having the pride in our wicket, we’re just not being resilient enough and something has got to change. We have got to play a lot better than we have been if we are going to beat any opposition around the world at the moment,” Smith said.

All the Test batsmen, including wicketkeeper Peter Nevill and spinner Nathan Lyon but not the three fast bowlers, will play in this week’s domestic Sheffield Shield games before the team for the third Test is chosen on Sunday. “Myself and everyone that is going to wear an Australian cap for the next game need to be a lot better and step up and start playing the way an Australian team needs to play,” Smith demanded. ALSO READ: Abbot, Rabada dismantle AUS as SA take series; Twitter erupts

Lehmann is also under major pressure, but Smith offered words of support for the coach and said the players were to blame for Australia’s problems. “It’s not his fault we’re not playing well, it’s up to us to go out there and do the job. I have absolutely no problem with anything Darren is doing at the moment,” he said.

He also praised the quality of the Proteas bowling attack, led by Kyle Abbott, Kagiso Rabada and Vernon Philander after strike bowler Dale Steyn was injured in the first Test. “It’s tough and the South African bowlers, when there is something in the wicket, Philander, Abbott and Rabada, they are world class,” he said.

“They hit the top of off-stump and got the ball seaming both ways and they don’t give you any freebies. And you have got to work hard for your runs,” Smith concluded. 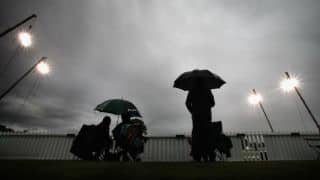