Australia slumped to another embarrassing home defeat, as they lost to South Africa in the second consecutive Test, on Day 4 of the second Test at Hobart.

Former Test champions and hosts Australia slumped to another embarrassing home defeat, as they lost to fellow former champions and visitors South Africa in the second consecutive Test, on Day 4 of the second of the three-Test series at the Bellerive Oval in Hobart on Tuesday, where they suffered a mammoth defeat by 80 runs and an innings. This is Australia’s second consecutive Test series loss, having earlier lost to Sri Lanka in the sub-continent 0-3, while this is also their third consecutive home Test series loss to the Proteas. Australia now stare at a huge possible embarrassment, if South Africa manage to win the third and final Test at the Adelaide Oval, and whitewash them 3-0. FULL CRICKET SCORECARD: Australia vs South Africa, 2nd Test at Hobart

Australia would have hoped for a better start to Day Four considering how they have fared in the second Test thus far against South Africa. With as many as 8 wickets in their kitty and the likes of Steven Smith and Usman Khawaja still out in the middle, their were chances that Australia might stretch the game into Day Five. Rain or no rain, Kyle Abbott and Kagiso Rabada were in no mood to play on until Day Five. The Bellerive Oval in Hobart were to witness an outstanding victory by South Africa, which could not be stopped with one whole day being washed-away. Faf du Plessis proud about how SA team is shaping up

Following the South African series win over the Australians, the Twitter exploded, as many former cricker and experts have bashed up the current Australian side, while few have praised the present South African side. Here are a few of those tweets:

Hard to think of better bowling as a “group” of seamers in the first hr of a days play in recent memory. SAvAUS. Excellent.

Geez, this is impressive!!!!! Good cricket surface to bowl on too. More like it please.

It’s said first innings runs and 2nd Innings wickets are the most important. How good is Kagiso Rabada #ausvsa

Wow that was ugly #ausvsa

Congrats SA too good @Kyle_Abbott87 well bowled bud. Disappointed for AUS, time to stand by them & fight for the rest of the summer.

Congratulations to @OfficialCSA Its been a complete team performance!! Awesome to watch

They will come back, but the hard question is when?! Confidence is at its lowest in the Aussie change room. https://t.co/2mriUbzB9u

Great series win by the proteas,go on for another series whitewash

Hahaha.. SL next up eh.. @NteboMac @OfficialCSA Beware of a surprise bra

Congratulations to the Proteas what a team achievement ! From management to players you guys have been sensational enjoy

It’s all over here at the Bellerive Oval. Aussies bundled out again and there’s MOM https://t.co/dBwl5H7L8n

Went back to sleep! #OMG

Bowling of the highest caliber. 3 bowlers on song in control. Planned and executed. Awesome!!

Bowling of the highest caliber. 3 bowlers on song in control. Planned and executed. Awesome!!

Think I’m gana have a beer at 3am

Facing a deficit of 121-run on Day Four, Australia were bundled out for just 161 runs in yet another batting collapse. Abbott recorded his third 5- wicket haul in Tests to hand South Africa a win by an innings and 80-runs; they also clinch the 3-match series 2-0. 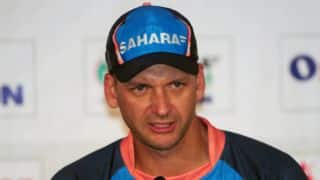 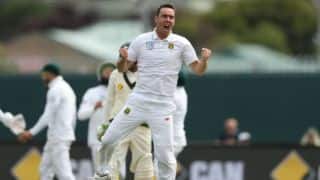