South Africa defeated Australia by 177 runs in the first Test at Perth.

South Africa fast bowler Kagiso Rabada and wicketkeeper Quinton de Kock have made it to the top 20 in the ICC Test rankings for the very first time in their brief careers. Rabada finished with seven wickets in the match against Australia in the first Test at Perth, out of which, five came in the second innings. De Kock on the other hand scored a vital counter-attacking 84 in the first innings and followed it up with a 64 in the second innings. South Africa as a result went 1-0 up in the three-match series, with the second Test scheduled to be played in Hobart in a few day s time. FULL CRICKET SCORECARD: Australia vs South Africa, 1st Test at Perth

Rabada is the fourth South African bowler to break into the top 20, with Dale Steyn, Vernon Philander and Morne Morkel already there. De Kock on the other hand is the third South African batsman after Hashim Amla and AB de Villiers to make it to Top 20 batsmen. Centuries from Dean Elgar and JP Duminy in the Perth Test helped them achieve rankings of 24 and 38 respectively. As far as the bowlers are concerned, Josh Hazlewood rose a couple of places to ninth, while Mitchell Marsh is now ranked 50th, after he picked up 2 for 77 in the second innings. Vernon Philander scored 10 and 73 in the two innings and also took 5 for 111 in the match, which has helped him rise one place to sixth in the ICC all-rounders category.

After the second Test at Hobart, South Africa and Australia will play a day-night Test at Adelaide from November 24. 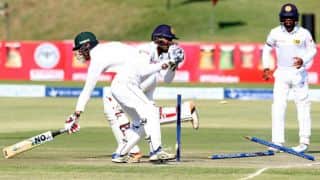