Wellington: Legendary Australian leg spinner Shane Warne has accused current skipper Steven Smith of ‘bad captaincy’ for his handling of off spinner Nathan Lyon during the team’s current struggle against South Africa in the ongoing Test of the three-match series in Perth. Smith gave only 12 overs to Lyon on Day Three as temperatures soared into the high 30s, thus drawing criticism from Warne, who believes the skipper’s snubbing of the off-spinner would have sapped the latter’s confidence. “It wasn’t like the ball was hooping around corners yesterday, they couldn’t take a wicket. I thought it was a bit weird Nathan Lyon didn’t bowl one over. He bowled 12 overs on a 37-degree day and the quicks bowled their hearts out,” Warne was quoted as saying by stuff.co.nz. Full Cricket Scorecard: Australia vs South Africa 1st Test at Perth

“To me it’s bad captaincy because you’re trying to get the best out of the players. To bowl him for 12 overs, his confidence will be low,” he added. In the ongoing first Test at the WACA, the Proteas are currently in the driver’s seat by reducing Australia to 169 for 4 at the end of the fourth day. Australia are still 369 runs behind and it would be herculean task for them to avoid a defeat on the last day of the Test match. Warne had earlier said that Test cricket has become boring for the fans. Should we just leave Test cricket as it is & hope people start watching again ? It s very sad, but Test cricket is becoming boring for the fans. Test cricket needs Promotion, more attacking cricket from the captains, pitches need to spin or seam, not flat & players need to entertain, he added. 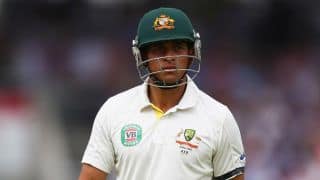