Cummins is Australia's highest-ranked bowler in Tests at No 3 after 28 wickets this summer.

Australia‘s Test skipper Tim Paine has lauded Pat Cummins‘ series-defining bowling against Sri Lanka as testament to his skill, while stating that the fast bowler is “pretty close to” being the best in the business.

Cummins, 25, is Australia’s highest-ranked bowler in Tests at No 3, a spot he grabbed last week following his ten-wicket haul during the day-night Test against Sri Lanka which the hosts won by an innings. That was backed by four wickets at Manuka Oval as Australia won by 366 runs to take the series 2-0.

All told, Cummins – appointed Australia s joint vice-captain last month – claimed 28 wickets at 17.78 apiece across six home Test matches this summer, spanning the India and Sri Lanka series. At the Gabba, he claimed a career-best 6/23 in Sri Lanka s second innings to outdo the 6/27 he grabbed at the MCG against India in December. (READ MORE: ‘Nice to get some reward’: Tim Paine relieved after maiden series win)

“He’s got to be pretty close to it, isn’t he?,” said Paine on Monday in Canberra when asked if Cummins was ahead of Kagiso Rabada, Jasprit Bumrah and James Anderson as the best fast bowler in Tests. “The difference with Pat and those guys is he doesn’t take the new ball. So he bowls at times when the ball’s not doing as much and the wicket’s a bit flatter.” (READ MORE: Mitchell Starc’s ten bowls Australia to 2-0 win over Sri Lanka)

A ten-wicket haul against Sri Lanka in the first Test took Cummins record to 90 wickets at 22.47 apiece, after 19 matches. This put him ahead of illustrious Australian fast bowlers in Dennis Lillee, Mitchell Johnson, Glenn McGrath, Brett Lee, Jason Gillespie, and Craig McDermott. Only Jeff Thompson with 91 wickets had more scalps after 19 Tests, though Cummins average is better.

“I think his ability to get it done in all conditions whether it’s moving around or not is second to none,” said Paine. I felt as the summer went on he actually got better and better and the more he bowled it felt like the quicker and more accurately he was bowling. I think he’s the fastest Australian (fast) bowler to 90 wickets or something like that. That probably says he’s right up there.” 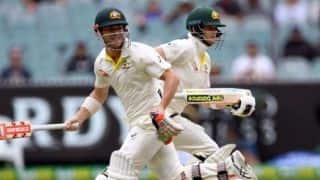