The opening batter and wicketkeeper won 128 votes to claim the ODI and T20I awards too.

Alyssa Healy‘s record-setting 2018 has fetched her three prizes at the annual Australian Cricket Awards, including the Belinda Clark Award in recognition of being the most prized member of the Australian women’s team. (READ MORE: Georgia Wareham scoops Betty Wilson Award)

This means the 28-year-old is the first Australian woman to claim the top two individual awards, introduced for the first time this year.

Healy came up with some superb performances in 2018, most notably in the team’s title run at the ICC Women’s World T20 where she scored 225 runs in six matches to be named Player of the Tournament as well as the ICC Women s T20I Player of the Year last year.

Healy finished as the World T20’s leading run-getter with 225 at an average of 56.25 and strike-rate of 144.23 with four consecutive Player-of-the-Match awards. Her contributions helped Australia storm into the final against England Women, who were defeated by eight wickets in Antigua to claim their fourth world title in T20Is. 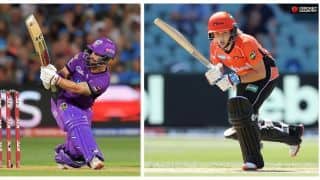