Cummins, aged 25 years and 279 days, is the youngest Border Medallist since Steven Smith.

The fast bowler Pat Cummins has been bestowed with the coveted Allan Border Medal at the 2019 Australian Cricket Awards in Melbourne on Monday, in recognition of his success over the past 12 months.

The Allan Border Medal recognises the Australian men’s team’s most valuable performer, and Cummins polled a total of 156 votes across Tests, ODIs and T20Is from his team-mates as well as umpires and media members to beat Nathan Lyon, who had 150 votes. (READ MORE: Nathan Lyon is Test Player of the Year)

The last Australian fast bowler to win the award was Mitchell Johnson in 2014. (READ MORE: Marcus Stoinis named ODI Player of the Year)

During the voting period of January 7, 2018 to January 8, 2019, Cummins claimed a combined 44 wickets from six ODIs and eight Tests.

Cummins – appointed Australia’s joint vice-captain in January – is Australia s highest-ranked bowler in Tests at No 3, a spot he grabbed last month following his ten-wicket haul during the day-night Test against Sri Lanka which the hosts won by an innings. (READ MORE: Glenn Maxwell named T20 Player of the Year)

A ten-wicket haul against Sri Lanka in the first Test took Cummins record to 90 wickets at 22.47 apiece, after 19 matches. This put him ahead of illustrious Australian fast bowlers in Dennis Lillee, Johnson, McGrath, Brett Lee, Jason Gillespie, and Craig McDermott. Only Jeff Thompson with 91 wickets had more scalps after 19 Tests, though Cummins average is better. 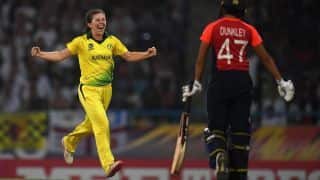