The proposal for a tri-series between the three teams has sparked controversies and discontent in Bangladesh's cricket arena.

Dhaka: The Bangladesh Cricket Board (BCB) has shrugged off claims that it is worried about the country’s participation in the Champions Trophy following the proposal of a tri-series involving West Indies, Pakistan and hosts Zimbabwe.

The proposal has sparked controversies and discontent in Bangladesh’s cricket arena. It will allow the two visiting teams to battle it out between them for the eighth and last slot in the prestigious cricket competition. The top eight One-Day International (ODI) teams, including hosts England, will take part in it.

Bangladesh climbed to seventh spot with 93 points during the recent ODI series against India that they won 2-1. West Indies are five points behind at eighth. Pakistan are currently ninth but have a five-match series against Sri Lanka starting on July 11. “The way things are now, chances of another team moving up is very slim. We are ranked seventh. We’ll be able to take part in the Champions Trophy if there are no big changes,” Nizamuddin said. “Pakistan and West Indies are below us in the present ODI rankings. There is a five-point gap between seventh and eighth, so chances are very slim for them.” READ: Bangladesh bowlers relieved by new ODI rules

He said only a specific set of results for Pakistan in their five-matches against Sri Lanka and in the tri-series in Zimbabwe would threaten Bangladesh’s ranking. For Bangladesh to slip out of top eight, Pakistan will have to beat Sri Lanka convincingly but lose to West Indies in the Zimbabwe tri-series.

Nizamuddin represented the BCB in the International Cricket Council (ICC) Annual Conference in Barbados last week. He discussed Bangladesh’s ranking situation there. “There is nothing called a guarantee in this situation. Their chances are very slim. Pakistan have to win a number of matches because they are below West Indies,” Nizamuddin said. READ: Mashrafe Mortaza deactivates Facebook fan page after abusive comments

Asked if there was a contingency plan if Bangladesh’s spot was under threat, he said, “We can’t just have a back-up plan. We need to find a team that is free and willing to play. We are still working on (a back-up plan).” The West Indies Cricket Board (WICB) confirmed the Caribbean side’s participation in the tri-series on Sunday. Pakistan and the hosts are yet to confirm.

The board CEO also pointed out that when a higher-ranked team beats a lower-ranked team, not many points would be earned. In that case, with West Indies and Pakistan below them, Bangladesh can ease up and focus on what is at hand. Bangladesh have a chance to accumulate ranking points and extend the lead over eighth-placed team next month when they play a three-match ODI series against South Africa at home. “We should be more focused on the South Africa series which is coming up shortly rather than playing matches against teams ranked below us,” he concluded. READ: Mortaza puts retirement on hold after BAN’s qualification for Champions Trophy 2017 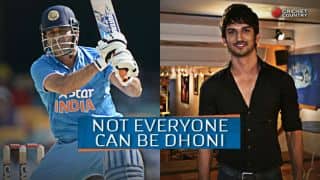