The new ODI rules will be introduced from July 5.

The decision of the International Cricket Council (ICC) to change One-Day International (ODI) rules on field restrictions has brought relief to Bangladeshi bowlers.

At its annual conference in Barbados, the ICC made a number of changes to the 50-over format, including the scrapping of batting powerplays. Among them, the requirement to deploy catching fielders within the 30-yard circle in the first 10 overs has been dropped and five fielders will be allowed outside of it in the last 10 overs, rather than the previous maximum of four, reports bdnews24.com. READ: Mashrafe Mortaza opts out of Facebook fan page after abusive comments

The rules will come into effect from July 5. Veteran Abdur Razzak, who has over 200 ODI wickets, has witnessed many rule changes during his 10-year career. The left-arm orthodox spinner saw multiple changes in powerplay application, introduction of free-hits, appearance and disappearance of super-subs.

“All changes over the last decade have favoured the batsmen as if cricket is only batsmen’s game. Now it seems ICC at least thinks about the bowlers. Something needed to be done to save bowlers as it was becoming too one-sided and anything one-sided becomes monotonous,” said Razzak. READ: Bangladesh newspaper tries to shame Indian cricket team with disgraceful ad

The previous rule of placing maximum four fielders outside the circle during the batting powerplay put spinners in a tight spot as batsmen scored boundaries at will.

“The spinners faced much trouble. Wicket-taking spinners were becoming rare in ODIs as restricting runs was becoming their main concern. Batsmen used to get mental advantage of having only four fielders outside. They could play shots at will while new batsmen could settle in quickly. The change of rules is somewhat good for spinners too,” said Razzak, who is out of the team at the moment. READ: Mortaza puts retirement on hold after BAN’s qualification for Champions Trophy 2017

Another southpaw Arafat Sunny has replaced him in the team. He too is happy over the change. “It’s very good. We now have some chance. We mainly focus on preventing runs. I hope we’ll be able to do that better now and by preventing runs, chances of getting wickets go up,” said Sunny.

“Batting powerplay proved to be a game changer many a time. Batsmen could keep attacking from the outset to the final 10 overs. Now we can have more control.”

Bangladesh captain Mashrafe Mortaza, however, is not too excited over the changes despite being a bit relieved. “I don’t think bowlers have much to be excited over. It’s still the batsman’s game. But still it’s better than before. The bowlers will be relieved even if it is for a bit,” said Mashrafe, who has 197 ODI wickets. READ: South Africa tougher opponents than India, says Mashrafe Mortaza

“Actually it is useless if the nature of the wickets are not changed. Around the world, ODI wicket means pure batting track. There is nothing for the bowlers. The bats too are very modern. So the bowlers’ job is always difficult, he added.”

The change has also made Mashrafe worried about his batsman. “I can’t just think of bowlers alone because I am one. I also have to think about the batsmen as the captain. Their advantage has been minimised now,” says the Bangladesh skipper.

But the 31-year old feels his job as captain will now be a bit easier. “I’ve had to think more about who’ll bowl first or who’ll bowl in the batting powerplay or in the last 10 overs. It required a lot of calculations. Now I don’t need to think about those as much.”

Although keeping close-in fielders is no longer obligatory in the first 10 overs, Mortaza is not ready to compromise with the team’s aggressive mindset. “Posting close-in fielders will depend on the situation. But I want to keep regulation fielders in the slips and close to the batsman at the start,” concluded Mashrafe. 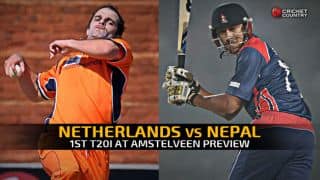