While it was not a high-scoring encounter, the game kept the fans on the edge of their seats.

It all came down to the last ball of the last over but Mohammad Saifuddin managed to hold his nerve as Comilla Victorians beat Dhaka Dynamites by a run in the 39th game of the Bangladesh Premier League (BPL) 2019 at the Shere Bangla National Stadium in Dhaka on Friday and continued their winning run. (ALSO READ: BPL 2019: Rangpur Riders suffer major blow, Alex Hales ruled out of tournament)

While it was not a high-scoring encounter, the game kept the fans on the edge of their seats as the hosts Dhaka Dynamites required 12 runs off the last ball, with the star West Indian all-rounder Andre Russell (30 not out off 23 balls) reducing the total to 6 off 1 ball. But Saifuddin, who won the Man of the Match award for his four-wicket haul (4/22), kept his calm and delivered a last-ball Yorker and denied Russell a chance to hit a biggie and Dynamites a win at home. (ALSO READ: Bangladesh Premier League: AB de Villiers fiery century leads Rangpur Riders to thrilling 8-wicket win)

The table-toppers Victorians almost sealed their place in the last four with a win while Dynamites hopes of making it to the last four came down to the mathematical calculations and made their last game a must-win encounter for the Shakib Al Hasan-led side. (ALSO READ: Bangladesh Premier League: Afridi, Tamim fire Comilla Victorians to top of table)

While Rubel Hossain (4/30), Sunil Narine (2/25) and Shakib (2/23) restricted the Imrul Kayes-led side to 127 despite Tamim Iqbal s 20-ball 38-run knock, Victorians ran through the hosts top-order before the middle-order, comprising of three West Indians Narine (22 off 24 balls), Kieron Pollard (34 off 33 balls) and Russell put up a fight and threatened to go past Victorians total. However, Saifuddin dashed the hosts plans and sealed a one-run win for his team. 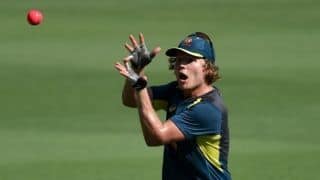