Warner replaces Bangladesh batsman Nasir Hossain as the skipper of the franchise.

Banned Australia batsman David Warner was on Friday confirmed as captain of Sylhet Sixers in the upcoming Bangladesh Premier League, taking over from Nasir Hossain.

Sixers are the third T20 franchise Warner will have played for since being handed a 12-month suspension in March for his role in the ball-tampering scandal.

Barred from playing for his state New South Wales and in the Big Bash League, Warner turned out in the Global T20 Canada tournament and the Caribbean Premier League over the past few months. His ban, as well as that of former Australia captain Steve Smith, will conclude at the end of March 2019.

Smith is also part of the BPL, having signed with Comilla Victorians for the franchise’s first four games. 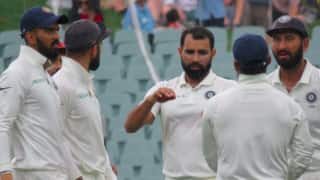 We’d be the worst blokes in the world if we celebrated like Virat Kohli: Justin Langer