Bangladesh vs Afghanistan, BAN vs AFG Only Test, Day 4 LIVE streaming: Teams, time in IST and where to watch on TV and online in India

Bangladesh vs Afghanistan, BAN vs AFG Only Test, Day 4 LIVE streaming: Teams, time in IST and where to wat

Right! So Day 5 does come. Will it be a day when Afghanistan create history by beating a Test side ranked higher than them? Or will rain save Bangladesh? Or… could we witness some serious digging effort from the home side to keep the tourists at bay? Don’t think question 3 will have an answer in the affirmative. But then, this is cricket. Join us at 9.30 am local (0330 GMT) for all the action from Monday. ADIOS! TAKE CARE!

Afghanistan… well, well, well. You could be on the cusp of making history. But if this Test match were to end in a draw, questions will be asked as to why did the visitors bat on the morning of the fourth day, when an iffy weather was forecast well in advance. Rashid continues to be on a roll, with 3 scalps but for us, the pick of the bowlers was Zahir Khan. He was a bit short in his lengths but he managed to bamboozle the batsmen with his googlies and leg spin.

Another difficult day for the home side. They did pick up the remaining two wickets of Afghanistan pretty quickly but then the batting has not stepped up at all. Shadman Islam and Shakib Al Hasan were the only two players to show some grit. The others were sucked into playing for turn and deceived by those which did not spin. They just have one last batting pair left, in Shakib and Sarkar and realistically speaking, would be looking at some help from the heavens.

4.51 pm: STUMPS ON DAY 4! This was coming. With the rain continuing to fall and the light fading, it was always going to be difficult to resume and this called was just delaying the inevitable. So Bangladesh survive to see the final day.

4.14 pm: OH DEAR! The heavens have opened again! Players are running off the field as the groundsmen hurry to cover the square. It’s pouring!

4.04 pm: GONE! Googly from Rashid Khan and Mahmudullah is OUT, he departs for 7, Rashid gets his third wicket, Bangladesh is all sorts of trouble now, 126/6

Over 41.6: Rashid Khan to Mahmudullah. out, OUT! CAUGHT! Mahmudullah is the latest casualty to bite the dust! Rashid gets his third! Bowls a flighted delivery on middle, Mahmudullah attempts to defend but it hits the inside edge of his bat which hits the front pad and goes towards short leg. Ibrahimk Zadran takes an excellet catch to his left. Afghanistan four wickets away now.

2.49 pm: ANOTHER WICKET! Rashid Khan to Mominul Haque. out, OUT lbw b Rashid Khan. Bangladesh have lost their fourth wicket. Mominul departs for 3, Bangladesh in tatters now, 86/4.

2.40 pm: WICKET! Over 23.1: Rashid Khan to Mushfiqur Rahim. out, OUT! LBW! Mushfiqur has to make the long walk back to the pavilion. Excellent ball from Rashid! Bowls a flighted delivery on middle, Rahim looks to defend but is hit on the front pad. Rashid puts in a huge appeal and the umpire after some thought gives it out. Rahim does not look amused and opts for a review. The replays roll in and the Hawk Eye shows three reds. Another failure for Rahim in this innings. Bangladesh 79/3

2:11 pm: Overs 16.5: GONE! Zahir Khan making today his own, picks his second wicket, Mosaddek is out of here! Zahir is ecstatic as he gets his second wicket in his debut match. Bowls a googly around off, Mosaddek looks for a lofted drive over cover but ends up getting a top edge towards long off. Asghar runs after it from cover and takes an excellent catch falling on the ground in the meanwhile. Mosaddek departs for 12, Bangladesh 52/2

1.48 pm: WICKET! Zahir Khan strikes in his first over! Bangladesh have lost their first wicket, Liton Das out plumb lbw for 9, BAN 30/1

1:23 pm: We’re back for the post-lunch session, but it looks like there’s a slight drizzle in the air. Yes, the heavens have opened up and the covers are on. We will have a delayed start to the second session. Hope it is a passing shower and play would resume soon.

12.52 pm: Nothing much happened in this mini-session with the ball neither seaming around nor spinning much. Technically, Bangladesh have got 5 sessions to try and score 398 or survive. Or shall we say, 368 now, as 30 runs have been taken off. But with the bad weather forecast, it will be intriguing to see how many overs do get bowled. Join us back at 1.40 pm local (0740 GMT) for the second session.

12.51 pm: A good session for Bangladesh, to be honest. They are only looking to play out time and with Afghanistan playing out the few overs this morning, it has definitely helped the home side. Bangladesh 30/0 (Shadman Islam 21, Liton Das 9)

11.54 am: Around 100 minutes left in the session. How many wickets can Afghanistan snare? Can Bangladesh begin their reply positively? The players are already out on the field. Liton Das and Shadman Islam are the openers for Bangladesh.

Coming to Afghanistan, a bit puzzling to see them bat this morning, to be honest. With a pretty poor forecast of the weather for today and tomorrow, it would have been logical to have declared overnight but they chose to bat and extend the lead. Not a very good batting display but Ibrahim Zadran and Asghar Afghan ensured that Bangladesh do not have a sniff to win. Shakib got 3 wickets, being the best of the bowlers easily while the others were there on and about but struggled mostly.

So just under 7 overs needed for Bangladesh to wrap things up this morning. But they have a tall task in front of them. The overall lead is 397 and even though Bangladesh have two days technically, it is going to take a huge effort.

11.45 am: Over 88.5: Shakib Al Hasan to Afsar Zazai. out, RUN OUT! Ahmadzai is gone this time. Outside off, angling in, Zazai backs away to the leg side and punches it towards cover. He sets off quickly for the single but his partner is caught napping. He takes off late and by that time the throw comes to the keeper, albeit a bit wide. Rahim collects and then drags him onto the stumps to dislodge the bails. Referred upstairs but replays show that Yamin is gone this time.

11.22 am: After being delayed for over an hour due to rain, we are all set to begin Day 4, the Bangladesh players are out in the middle along with Afsar Zazai and Yamin Ahmadzai. Taijul Islam will finish his over with Afsar Zazai taking strike.

10.44 am: It has stopped raining! We are hearing that the covers are being slowly peeled off and some sunshine has appeared. Fingers crossed for a start soon.

10.25 am: This is NOT going to stop! It has started raining back again. Just going to be one of those days.

9:52 am: Right then, the rain has stopped and the groundstaff at busy removing the water. Should have some good news in a while.

9:31 am: We are getting information that a depression is being formed on the Bay of Bengal and there is forecast for heavy rain for both the days. So, a draw cannot be also be ruled out. In the meanwhile, it’s still raining!

9.21 am: Oh dear. Bad news to begin with. We were supposed to start 20 minutes early but it has started to rain at the ground but it is not too heavy at the moment. So we will have a delayed start. Hopefully, it is not for very long. Stay tuned for further updates.

9.15 am: Welcome to the coverage of the fourth day between Afghanistan and Bangladesh. The visitors are on the verge of creating an upset here as they are leading by 374 runs and they would be looking to add some more runs to their kitty. After a poor start with the bat in the second innings, Ibrahim Zadran and Asghar Afghan were magnificent with the bat and along with cameos from Rashid Khan helped them swell their lead. They would hope that they wrap up the game today itself as there is forecast for rain for the last day. The hosts, on the other hand, were just going through the motions by the end and are in really need of something special to have any chance in the game. Will the Bangladesh Tigers make a fist of this game or Will the visitors finish this game today itself? Join us in a while to find out.

Ibrahim Zadran and Asghar Afghan hit half-centuries while Rashid Khan played a quick cameo after claiming five wickets in an innings, as Afghanistan took command in the one-off Test against Bangladesh in Chittagong on Saturday.

The visitors — playing only their third Test in history — reached 237-8 at stumps on the third day, setting a huge target for Bangladesh by taking an overall lead of 374 runs.

Debutant Zadran hit highest 87 off 208 balls for Afghanistan in the second innings while former skipper Afghan made 50 off 108 balls, his second fifty, adding to Bangladesh’s frustration.

Skipper Shakib Al Hasan took three wickets for Bangladesh, including two in the first over of the innings, but Zadran and Afghan shared 108 runs for the fourth wicket to snatch the momentum back for Afghanistan.

Shakib trapped Ihsanullah Janat for four in the third ball of the innings and then dismissed first innings centurion Rahmat Shah for a golden duck in the next ball.

Afghan, who also made 92 runs in the first innings, joined Zadran after off-spinner Nayeem Hasan removed Hashmatullah Shahidi for 12.

The spinner also dismissed Mohammad Nabi in the next ball after the all-rounder hit him for a six to revive some hope for Bangladesh. 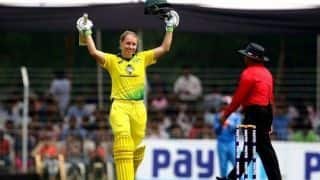 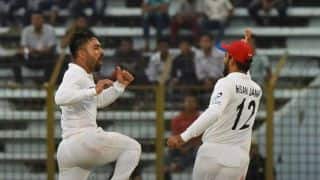