Bangladesh all-rounder Suhrawadi Shuvo was immediately hospitalised after being hit by a bouncer on lower side of the his neck on Saturday morning.

There have been many cases of cricketers being hit by bouncer and got injured. Recent case of Sri Lanka batsman Kaushal Silva hit by bouncer also made the news. This time a Bangladesh all-rounder Suhrawadi Shuvo was immediately hospitalised after being hit by a bouncer on lower side of the his neck on Saturday morning. He was playing for Victoria Sporting Club in Dhaka Premier League against Abahani and was struck by a bouncer by Bangladesh yet another fast bowler Taskin Ahmed. Although, Bangaldesh Cricket Board’s (BCB) chief physician Dr. Debashish Chowdhury has assured that he is stable but will undergo scan at Apollo Hospital. ALSO READ: Dinesh Karthik latest Indian entrant in Dhaka Premier League: Reports

The physician further attributed the occurrence of the accident to the batsman’s helmet that didn’t satisfy the new safety regulations, as reported on cricbuzz.com. Chowdhury spoke and said, “The CT scan and MRI showed that there has been no damage to his brain. He will be kept under observation for the next 24 hours at the hospital as a precautionary measure. He is stable now, but as with any head injuries, they will observe him for at least 24 hours. It would have helped if he was wearing the helmet with new safety regulations, but he wasn’t.” ALSO READ: Mustafizur Rahman: When Bangladesh added ‘Fizz’ to their bowling arsenal

New safety regulations were given importance after Phil Hughes lost his life after being struck by a bouncer below his ear late in November 2014. The 27-year-old batsman fell on the ground after being struck by the bouncer and had his eyes covered with his hands while the opposition ran towards him for assistance. He was soon rushed to a local hospital. The left-hander, who has played a lone Test and T20I along with 17 One-Day Internationals, last represented his country in 2011. 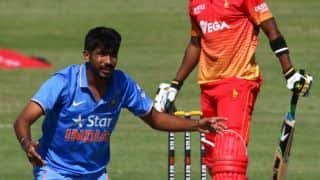