The latest spinner from Afghanistan to sign up with a Big Bash League (BBL) franchise is Qais Ahmad, who has joined Hobart Hurricanes as a replacement for the injured English fast bowler Tymal Mills.

Ahmad, 18, shot into the limelight in early 2018 when he finished as Afghanistan Under-19s’ leading wicket-taker at the junior World Cup in Zealand. In October, his five wickets in the final of the inaugural Afghanistan Premier League T20 set up a title triumph for Balkh Legends. A legspinner, Ahmad claimed 5/18 from his four overs to limit Kabul Zwanan to 132/9 in 20 overs, which Legends chased in 18.1 overs. (VIDEO: Highlights of Afghanistan Premier League final)

Ahmad has also played for St Lucia Stars in the Caribbean Premier League and Bangladesh Premier League. He took seven wickets in eight CPL games, with an economy rate of 7.60. (READ MORE: Year-ender 2018: Afghanistan s best year of all)

“We’re delighted to secure the services of Qais for the back end of the BBL. He is another in the line of exciting Afghanistan wrist spinners and we’re sure he can help our already talented squad be successful come BBL Finals time,” said Jamie Cox, Cricket Tasmania’s talent manager.

Afghanistan spinners Mohammed Nabi, Rashid Khan and Mujeeb Ur Rahman all play in the BBL. 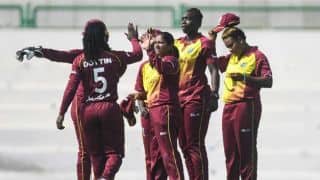