The Board of Control for Cricket in India‘s (BCCI’s) current Chief Executive Oficer (CEO) Rahul Johri on Tuesday served a notice to general manager of cricket operations MV Sridhar, following his failure to provide further details on the graft case. The Committee of Administrators (CoA), appointed by the Supreme Court, has been in charge of the BCCI since February 20-17, and has been ordered to keep the office clean as well as make sure that there is no conflict of interest. Sridhar, who had earlier submitted a disclosure form, failed to mention that there was a case pending with the Anti-Corruption Bureau (ACB), who are probing into the financial irregularities involved while constructing the Rajiv Gandhi International Stadium in Hyderabad. After Kumble’s resignation, Sridhar to supervise Indian team management for WI tour

It is not a show cause notice, because earlier a declaration was sought from all employees about their education qualifications. The point of not disclosure is not correct. I have received a mail asking me to share the details regarding the old ACB case filed in 2011 in Hyderabad. I have confirmed that I will share all details with regard to this case which does not indict me in person. I m filing a discharge petition, a copy of which I will also enclose with my reply. As far as the club thing goes, I will seek clarity from my CEO. I respect the procedure being deployed and I will furnish all information as required by the management, Sridhar was quoted saying by The Indian Express. 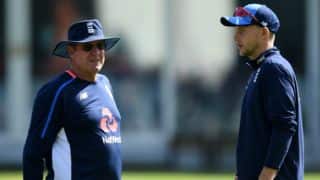