There is a buzz doing rounds that the BCCI has not paid the Indian Test players their match fees for the recently concluded season.

Board of Control for Cricket in India (BCCI) has been in the news lately and mostly for wrong reasons. There is a buzz doing rounds that the BCCI has not paid the Indian Test players their match fees for the recently concluded season. As per reports the Indian team were not paid their dues that includes fees for a period of last 6 months. Vinod Rai, head of the Supreme Court appointed Committee of Administrators (CoA) has categorically denied this. Rai in an interaction said that in case players were not paid their due they will be paid by the next 24 hours. Gautam Gambhir s mantra on making India a winning country

Speaking after the releasing a book Hero biography of Sachin Tendulkar at Cricket Club of India (CCI), Rai said that there was no proof that tension between BCCI and COA is delayed the late of payments. Totally false. Show me the records and I ll show you my records that the payment has been made, said Rai in a report published by HindustanTimes. Shahryar Khan: Big Three an undemocratic set-up

The BCCI pays Rs 15 lakh to each member in the playing XI for a Test match while Rs 7 lakh is paid to those warming the bench. The players are supposed to get their payment within a gap of 15 to 30 days of a completion of a Test. ICC CT 2017: CoA’s Vinod Rai optimistic regarding India’s participation

He further added, Maybe something is held up somewhere. In fact, we have paid state associations also, he said. If there still is I am not saying you are wrong if there s somebody who has got left behind, there must be some reason. It can always be rectified and we will rectify it in 24 hours. If there s a particular issue, we will take care of it. BCCI SGM to be held on May 7; Champions Trophy participation to be discussed

Rai was of the view the current crop of player are not paid their dues when it comes their show for India. Why do all of us accumulate, collect and go to see the matches, because this set of cricketers performs remarkably on the ground. All that you must ve been reading about it in the newspapers, it s unfortunate and I don t think we re doing good service to the excellent team that we have, Rai concluded.

Earlier, Indian Express had quoted one of the current players from the Test squad. Usually, we get our dues within a month or 15 days of a Test match but this time, the delay has been long. We don t know what the reason is but such delays have never happened earlier, said a player, a regular member of the Virat Kohli-led Test side through last season,” said the player. 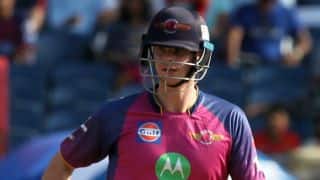