Billings dislocated his shoulder playing for Kent in the Royal London One-Day Cup on Thursday.

Sam Billings, the Kent wicketkeeper-batsman, has been ruled out of England’s one-off ODI against Ireland and T20I that follows versus Pakistan next month.

Billings dislocated his left shoulder minutes into Kent’s Royal London One-Day Cup match with Glamorgan on Thursday while fielding, and as treated with oxygen before he left the field. Subsequent scans today revealed the nature of Billings’ injury and the 27-year-old will not be able to join England’s ODI and T2oI squad.

He has been replaced by Surrey wicketkeeper-batsman Ben Foakes, for whom this is a first call-up to an England limited-overs squad.

With Jonny Bairstow and Jos Buttler rested for the two internationals at Malahide and The Ageas Bowl, Foakes is in line to make his ODI and T20I debuts.

He has played five Tests for England, and having scored three successive fifties for Surrey in the One-Day Cup the 26-year-old has been selected as Billings’ replacement. 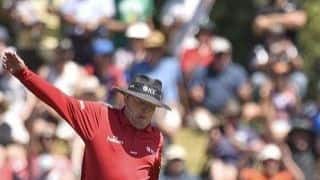