Beyond All Boundaries set to release in theatres in India

Beyond All Boundaries set to release in theatres in India

Though the film is now being released, getting it to the Indian market wasn’t an easy task.

Beyond All Boundaries, a feature-length documentary is all set to release in theatres in India on Friday. Directed by Sushrut Jain, the documentary is based on India’s successful ICC World Cup 2011 campaign, portrayed alongside the story of three Indians who find their expression through this hugely popular sport in India.

The documentary revolves around Prithvi Shaw, a young prodigy who now holds the record for highest score by an Indian in minor cricket; Sudhir Kumar, famously remembered as an ardent fan of Sachin Tendulkar, and a young girl named Akshaya Surve who is trying to find her footing in women’s cricket.

The 97-minute documentary has been co-produced with Kunal Nayyar from The Big Bang Theory fame. Elaborating on the value added to this project by Nayyar, filmmaker Jain said, “Kunal has been vital for the film. He did the narration and he is also a very recognisable name in the industry. When he signed on as co-producer he decided to help me raise money. We promoted on Kickstarter where he made a plea to all his fans and we were able to raise around $35,000 for this film and he put his own money and time as well. It was a tremendous boost for me to have somebody like that involved.”

Though the film is now being released at select theaters in Mumbai, Delhi, and Pune, getting it to the Indian market wasn’t an easy task. “Even though we have won awards in the US, for some reason we are still not known here. Now we got an interest from a small company called Matterden in Lower Parel (Mumbai) that owns a theatre. Essentially it’s still just me and Matterden. We know the film is really good. When the media came and watched during press screenings, they loved it. We are hoping that they’ll spread the word and people will come out and watch,” said Jain.

The documentary has grabbed numerous awards at film festivals across the globe. It won the Best Documentary Award at the Indian Film Festival in Los Angeles, Outstanding Documentary in reel World Film Festival and several other awards. The film was conceptualised back in 2011 before the World Cup and took approximately three years for completion.

Read CricketCountry’s review of Beyond All Boundaries here 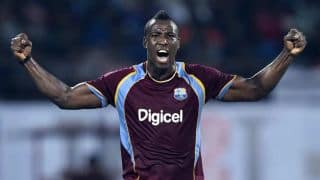 India vs West Indies 2nd ODI at Delhi, Preview: Hosts look to fight back after listless show in series opener