The decision led to chaos on the field with Heat coach Daniel Vettori and skipper Chris Lynn engaged in animated discussions with the officials near the boundary rope.

The opening game of the Big Bash League 2018-19 was not without drama, this time due to an umpiring decision which was rectified by the fielding unit that resulted in the departing batsman getting a reprieve.

The incident occurred during defending champions Adelaide Strikers five-wicket victory over Brisbane Heat. Put into bat, the Strikers had already reduced Heat to 92 for 6 with Jimmy Peirson and James Pattinson batting.

Midway during their innings, Peirson jabbed one towards point and scampered for a quick single. Pattinson, at the other end, made a dive and while he looked to be home, the third umpire thought otherwise and ruled it out.

The decision led to chaos on the field with Heat coach Daniel Vettori and skipper Chris Lynn engaged in animated discussions with the officials near the boundary rope.

Even Adam Gilchrist, the commentator sounded perplexed. The rule is that something has to be grounded, as soon as something has grounded the batsman is in. This is farcical. Someone has to make a decision now, he said.

However, just as Pattinson, disgusted by the decision, made the long walk back to the pavilion, he was called back to resume his innings. It was revealed later that Strikers captain Colin Ingram had decided to withdraw the appeal after having a discussion with team-mate Ben Laughlin.

It was a unique scenario, I ended up chatting with Benny Laughlin, and he said what is the option with withdrawing the appeal, so the initial idea came from him, Ingram told Fox Cricket later.

We can all clearly see that it wasn t out, you ll look like an idiot on TV if it isn t, but we ve got to back what we saw and most of our boys were happy and just wanted to get on with the game.

Pattinson didn t make much out of the reprieve as the Heat were skittled out for 146. In reply, opener Alex Carey s 46-ball 70 helped the Strikers sail to a comfortable victory. 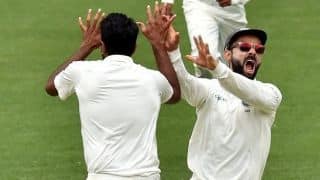 Virat Kohli over the top, but in a good way: Allan Border