The win pushed Renegades to second place with points.

A fine bowling effort from Chris Tremain (three for nine) and Daniel Christian (four for 20) powered Melbourne Renegades to a dominating 78-run win over the Perth Scorchers in a Big Bash League (BBL) match on Monday. The win pushed Renegades to second place with points. (ALSO READ: 14 games is too many for Big Bash League – Chris Lynn)

Chasing a par score of 158, three-time BBL champions Scorchers were bowled out for a paltry 79 in a grossly one-sided affair at the Optus Stadium in Perth. Scorchers registered their second-lowest total in BBL history.

As many as eight batsmen from the Scorchers registered single-digit scores with Nick Hobson top scoring with 19 runs.

The downfall began with Tremain, whose opening spell left the hosts reeling at 12/4. Once he was done, Christian took over as wickets kept falling at regular intervals. Not even the Marsh brothers Shaun and captain Mitchell Marsh could resurrect the innings. Shaun was dismissed for a three-ball duck, while his younger brother added just five before he became Tremain s third victim in the sixth over. (ALSO READ: All-round Stoinis takes Melbourne Stars to third spot)

Earlier, Mackenzie Harvey top scored with 38, while Sam Harper made 37 to push Renegades to 157 after they were put into bat. Captain Aaron Finch missed out to register a big score and departed for just eight to Matthew Kelly, who returned with two for 30 in his four overs. 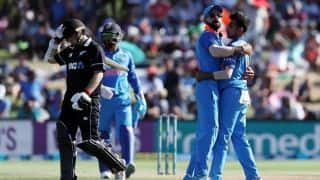