India drew the second Test with New Zealand in Wellington on February 18, 2014. India were chasing an improbable 435-run target as New Zealand had declared their second innings at 680 for six. Virat Kohli was unbeaten on 105 and Rohit Sharma was on 31 as India finished at 166 for three. New Zealand have won the two-match Test series 1-0.

The post-tea session began with India at 90 for three. Kohli got two runs towards backward square-leg and reached his half-century. This was Kohli’s 10th half-century in Test cricket. Kohli then hooked a bouncer from James Neesham for a single to bring up India’s 100.

Boult bowled a full and wide delivery outside off-stump and Kohli played a brilliant cover drive for a four. Southee tried to bounce Kohli again, but he swiveled on his back-foot and pulled it for a four towards mid-wicket.

Kohli then got to his century by hitting two fours in-a-row down the ground towards long-on. This was Kohli’s sixth century in Test cricket. He has scored three centuries away with one each coming in Australia and South Africa.

As the Test was just trudging along, the umpires asked McCullum whether the match could be called as a draw and he said ‘yes’. The match was drawn before it headed to the last hour of play.

New Zealand won the two-match Test series 1-0. McCullum was the obvious choice for the Man of the Match. 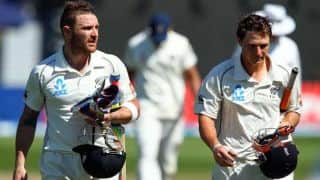