Initially considered a joke, West Indies media manager later confirmed to the press that Gayle was not kidding and that he was hopeful of getting a farewell series.

MANCHESTER: West Indies batsman Chris Gayle has taken a U-turn from his decision to retire from ODIs after the World Cup. The opener, who announced in February that the World Cup 2019 in England would be his one-day swansong, expressed his desire to play against India, who are scheduled to tour the Caribbean for two Tests, three ODIs and three T20Is between August and September.

“It’s still not the end. We still have a few matches to go, and maybe another series after this so who knows? We’ll see what happens,” Gayle said during the press conference on the eve of West Indies’ game against India at the Old Trafford. ALSO READ: Chris Gayle not ruling out retirement U-turn

“My plans after the World Cup? I may play a Test match against India, and then I’ll definitely play the ODIs against India. I won’t play the T20s.”

Initially considered a joke, West Indies media manager Philip Spooner later revealed to the press that Gayle was not kidding and that he was indeed serious and hopeful of receiving a farewell series. “Yes, Chris will play his last series against India,” he said.

Gayle has played 103 Test matches between 2000 and 2014 having scored 7109 runs with two triple centuries. In the six matches this World Cup, Gayle has scored two half-centuries even though West Indies have struggled to perform, winning just one game, tasting defeat in four and another getting washed out.

Jason Holder, the West Indies captain, although surprised, seemed content with Gayle’s decision to un-retire from ODIs. “Yeah, I was just updated by Phillip. He didn’t really say anything in the dressing room. But, yeah, it’s great and it’s great for cricket. It’s good to have Chris around, as I said before. He’s got a lot to offer still, I believe. And hopefully his body can hold up. Hopefully he can be on the field a bit longer for West Indies,” he said.

“I just found out as well, too. I guess I have to go downstairs and have a serious conversation with him. But, yeah, if he’s dedicated to playing for West Indies any longer then I feel it’s definitely going to benefit us having him around.”

It was a typical Gayle press conference, one that saw him laugh joke and hold himself in high regards. Beginning his international career under the great Brian Lara, Gayle mentioned how he’s enjoyed every moment playing for the West Indies. As for where he considers himself among the pantheons of West Indies’ all-time greats, pat came Gayle’s response.

“I’m definitely up there. I’m definitely up there with the greats without a doubt. Like I say, I enjoy each and every moment of West Indies, playing for West Indies. It’s been a lot of ups and downs. I’ve got to say I really enjoy each and every moment. But we share some quality moments with some quality players as well. I started my career with the likes of Courtney Walsh, Curtly Ambrose, you watch them on TV and you realize they’re in the dressing room, it’s just a bunch of guys,” Gayle said.

“And Brian Lara, the first captain as well, Carl Hooper. So it’s some quality moments when you look back on it. I’ll have to analyse it and give you full details, a better exclusive interview on that particular moment, and then you can take it further. But like I said I could not have had a better career as a player representing the West Indies.”

For someone of Gayle’s calibre, who has redefined modern-day hitting, he has always been a beast in limited-overs cricket. That said, Gayle has a had a stellar Test career as well, slamming 15 centuries, two of which he converted into a 300-plus score.

“Two triple centuries in Test cricket. Those two will definitely be on top. A double century in the World Cup as well. Those are a couple of the moments to come up with at this particular time, but there’s a lot more to actually talk about. But if I get into detail it will be a long list, to be honest with you. But I’ll stick with those for now,” Gayle said.

With 230 runs from five innings, Gayle had shown signs of his destructive best but has bee bogged down by lack of support from the rest of the batsmen, especially the middle order. In the game against New Zealand, looking set for a century, Gayle fell short  by 13 runs. West Indies have an extremely slim chance of qualifying for the semis and before his World Cup career winds up, Gayle wants to go out on a high.

“In these three games, I’d love to get a hundred as well. But if it doesn’t happen, I can’t actually complain or be too hard on myself. I’ve actually achieved a lot. But the more – what I really wanted was actually to be in that playoff. What I really wanted was to be in that final four and then anything could have actually happened and then to be able to get my hands on the World Cup. We’ll see what happens,” he said. 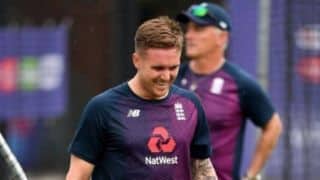