Mohammad Nabi kept nerves to rescue his side with an important 46 off 24 balls.

In the ongoing Bangladesh Premier League (BPL) 2016 Match 22, Chittagong Vikings (CHV) beat Comilla Victorians (CV) by six wickets to get their second consecutive win against them. After struggling for five consecutive matches, defending champions, CV came to this game with a victory against Bairsal Bulls (BB) yesterday and showed confidence but faltered in the death overs to lose. CV batted first and scored 183 for 3 in their quota of 20 overs. They came back hard with the ball despite starts from CHV’s top-order but Shoaib Malik and Mohammad Nabi’s fighting cameos took CHV home in the last over. Bangladesh Premier League (BPL) 2016: Points table and team standings

Winning the toss, Mashrafe Mortaza elected to bat with dew being a crucial factor in the second half of the innings. Dew was evident since the start only as there were misfieldings and sloppiness in the field by CHV but they got the better of Nazmul Hossain Shanto early. However, it was Khalid Latif along with crucial starts from Ahmed Shehzad and Imrul Kayes to take their side to a healthy total. Taskin Ahmed and his set of bowlers pulled things back a bit but could not prevent CV to post less than 180.

In reply, Dwayne Smith gave a solid platform to his side blasting 18 off the first over but soon departed off Mortaza’s ball. Tamim Iqbal and Anamul Haque looked set to take their side home but departed after effective starts. This, however, brought Shoaib Malik in the middle who took slight time to get a look-in but started hitting with less than 5 overs left.

The twist was in the tale with Malik and Nabi going berserk as they slammed big shots at the right time. Malik departed for 38 but Nabi kept nerves to rescue his side. CHV won by 6 wickets and with this earned two vital points in the points table. 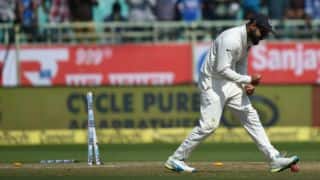