The new inclusion policy allows people to play cricket based on skill rather than gender.

In an important step towards the inclusion of all in elite sport, Cricket Australia (CA) on Thursday announced a new policy which permits transgender and gender diverse cricketers to play the sport.

As per CA’s new guidelines, a player can compete in the gender which they identify with irrespective of what gender they were assigned at birth. Players will be required to nominate their gender identity fo CA’s head of integrity and prove that this choice is consistent with their day-to-day life.

In accordance with the ICC’s gender recognition policy, they will also beed to have a concentration of testosterone of less than 10 nanomoles per litre for a minimum of 12 months leading up to their gender nomination. As per CA’s guidelines, a transgender cricketer with the suitable testosterone levels could play state level cricket or in the national women’s teams.

Announcing the new transgender policy, CA’s CEO Kevin Roberts said: “It doesn’t make any sense that today, people are discriminated against, harassed or excluded, because of who they are. And that’s not right. Today we demonstrate our commitment to include people with an affirmed gender identity in the game at every level and ensure all people in our communities experience Australian cricket’s inclusive culture.

“As strength, stamina and physique are all relevant factors when competing in competitive sport, transgender and gender diverse players will be supported to participate in elite cricket, subject to certain criteria through the implementation of this policy.”

“Cricket Australia’s vision is to be a sport for everyone,” James told 3AW. “Transgender people are people and Australians. It’s a human right to be able to play sport and you should be able to play in a team that you feel comfortable with.

“Cricket is a skill based sport, strength is not that relevant. If you have the ability to play good cricket, it’s important that you have somewhere to go. It means that there is now a pathway, people won’t feel like they aren’t able to play a sport that they love. A female could play for the Australian men’s team and vice versa. This will encourage transgender to really get out there and take up sport again.”

Commenting on the development, Australian cricketer Alex Blackwell called for more transgender cricketers to be included at all levels.

“I benefitted so much from sport in elite teams I don’t think trans and gender diverse people should be excluded from that. I’d love to see more transgender people engaging in sport, I’ve probably had more involvement with transgender sport people than most,” said Blackwell. 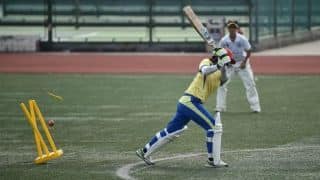