Hobart: Cricket Australia chief James Sutherland refused to quit Wednesday and backed under-fire chairman of selectors Rod Marsh to see out his contract despite the national team’s humiliating run of Test defeats. Steve Smith’s team plunged to a demoralising innings defeat and series loss to South Africa in their fifth straight Test hammering following yet another chaotic batting collapse in Hobart Tuesday. Australia now face being whitewashed in a home series for the first time in history if they lose to the Proteas in next week’s final day-night Test in Adelaide. FULL CRICKET SCORECARD: Australia vs South Africa, 2nd Test at Hobart

The last time they lost six Tests — against India and England in 2013 — the coach at the time, Micky Arthur, was sacked. “Clearly there are going to be changes for the next Test match and there will be a different group of players that gather for the next Test,” Sutherland said, with only a handful, including Smith and opener David Warner, seen as safe.

“I don’t know how many changes there will be but those players who are there need to be very clear about the challenges.” Australian cricket is in a febrile state with critics calling for heads to roll to arrest the downward spiral of the national team just three months after they were ranked top in Tests and one-day cricket.

Sutherland, who has been Cricket Australia (CA) chief executive for 15 years, called a media conference to address the issue in Hobart and was immediately asked if he would be stepping down. “Ultimately, that’s a decision for the CA board if I am the right person to lead, but broadly speaking Australian cricket is in good shape,” he told reporters. Australia vs South Africa, 2nd Test: Australian side in shambles; Steven Smith not to be blamed alone

“Clearly the performance of the Australian team over the last three months is not good enough and not in keeping with the expectations of our fans and CA. “I may be sounding defensive in that, (but) the game of cricket is in good health and we are going forward but at the same time we are not shying away from the issues. It is my responsibility to lead the people to turn this around.”

Sutherland also supported Marsh to see out his contract after the embattled chairman of selectors said his tenure would end in mid-2017. “Rod’s in the team and clearly he’s doing like everyone else the best job he can and working very hard at it,” he said. “He said he will finish up June and we will make decisions about where and how we transition to that in the future.”

Jason Gillespie or Ricky Ponting have been touted as possible successors. Australia’s current four-man selection panel consists of Marsh, Mark Waugh, Trevor Hohns and coach Darren Lehmann. Sutherland also came under fire over the limited preparation the Australian players had leading into the flawed South African Test series, which he admitted was “something we will have a closer look at”.

“Preparation and scheduling is an issue and continues to be an issue, it is partly about performance but also about the business of cricket as well,” he said. Sutherland revealed he was caught out by Australia’s sudden batting collapse of eight wickets for 32 to lose the Hobart Test before his arrival at the Bellerive ground.

“I came down to Hobart yesterday and my plans were to see a little bit of cricket but unfortunately I didn’t get here in time,” he said, adding that he spoke with players and support staff after the game. I did make a couple of comments to them broadly about how serious and challenging the situation is and obviously the disappointment of cricket fans across the country.” 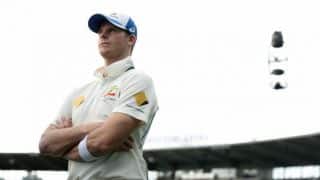 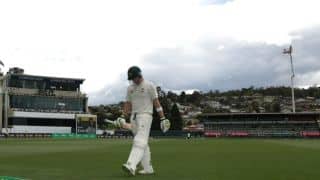