Australia continues to succumb to newer lows' match after match in the longest format of the game.

Australia continues to succumb to newer lows match after match in the longest format of the game. After a routing handed to them in the first Test at Perth, they were gifted a humiliating innings and 80-run defeat by South Africa in the second Test. The Bellerive Oval witnessed a bleak image of a team, which was ranked No.1 Test side not too long ago. Skipper Steven Smith, who had a wondrous start to his Test captaincy by winning all seven of his first games, has now seen as many as five losses in a row. It all started with a historic whitewash by Sri Lanka in the Emerald Island, where the Kangaroos were outplayed in all the 3-Tests, with their No.1 ranking being snatched away from their grasp. FULL CRICKET SCORECARD: Australia vs South Africa, 2nd Test at Hobart

Australia s next assignment was against South Africa in their backyard, where it would have been nearly impossible to topple them. South Africa were coming to Australian outback with their maverick regular Test skipper AB de Villers, but had the likes of Dale Steyn, Hashim Amla, JP Dumiy and interim-skipper Faf du Plessis to press-on for a victorious outing. First Test at Perth saw Australia skittle out South Africa cheaply in the first innings thanks to a spirited show by Josh Hazlwood and Mitchell Starc.

In reply, Australian batsmen meandered to a 2-lead over the Proteas; a lead that was squandered by them as Dean Elgar JP Duminy cracked centuries along with quire-fire fifties by Quinton de Kock and Vernon Philander enabled the visitors to ask Australia to chase down 538 runs. Australia batsmen showed resolute the second time around as Usman Khawaja and Peter Nevill struck the fifties.

South Africa s new teenage sensation Kagiso Rabada saw this a perfect opportunity to make a name for himself and stockpiled a 5-for to guide his team towards Test supremacy; Australia were down and out been punched right in the face in the very first Test by a margin of 177-runs.

After the Perth loss, Australian team came into scrutiny from all corners, former players, cricket experts and media hounded the team like a pack of wolfs. Former Australia and South Africa skipper Kepler Wessels said that the Australian side lacked quality, passion and the fighting spirit and asked questions about Smith s-captaincy. Former South African skipper Graeme Smith, said that, There is obviously a lack of confidence that has developed, maybe through these losses, and the way they collapsed and fell away in that Perth Test. To me, it showed that maybe, there is a lack of confidence or self-belief in that set-up at the moment, which is not completely wrong. Australia have not really focused on the skill set required to win the matches, rather have been roping in players because they have been ok in domestic circuit. (mind you, ok is not the parameter to enter Australian Test squad, ask Michael Hussey or Matthew Hayden)

Handing out Test caps on a regular basics does not do good for he side or the player himself. The Australian management debated much about Decision Review System (DRS) post their defeat at Perth than actually toiling and sweating it out in the middle practising. Both Smith and Mitchell Marsh were controversial given out under dubious conditions. Australia regularly have been hampered by the loss of key players due to injury, their perennial injury-men Shaun Marsh and Peter Siddle were again announced unfit to participate in the Hobart Test. ALSO READ: All said and done, last thing cricket needs is a weakened Australia

Out of favour Joe Burns was roped in, who was ready make a splash at a beach south of Tasmania. Australia also announced First-Class veteran Callum Ferguson out of the blue, and straight into the side to participate in second Test. Such sudden call-ins are hard to digested take toil on the mental make of off a player, having said that any international cricket must be prepared to switch on/off in a jiffy.

With their regular bowlers’ (James Pattinson, James Faulkner, Pat Cummins) out of action due to forced injuries or lack of confidence from part of the selectors, Joe Mennie was included on the side as a replacement for Peter Siddle. Australia selectors do not have a problem of plenty but a problem of few. Their bowling bench strength has since a year or so have depleted so unforeseen reasons.

Coming to the Hobart Test, head coach of Australia Darren Lehman has already issues warning shots for players, including those were in the side due to their reputation/proximity to the skipper. Lehman himself will be reeling under the pressure of being sacked as a head coach, going by history; whomsoever is the coach after four consecutive Test defeats has been unceremoniously being sacked. Lehman in his defence could put the ball in the skipper’s court and shy away but has been vocal about every loss in media, which has only mounted pressure on himself and Smith.

The second Test was supposed to be a resurrection of sorts for Australia, in an ideal universe but was not to be. Australia were annihilated in the first innings to suffer a horrific batting collapse which saw then bundled out for just 85 runs; where Smith remained not-out on 48*. If not the grit and desire to stay put in the middle demonstrated by Smith, Australia would have only made a mere 37. Australian bowlers in Starc, Hazlewood and Mennie oozed lacklustre-ness and timidness most of the time.

Yes, Hazlewood did manage a 5-for to his name but it after all the damage had been done by the likes of Quinton de Kock, Temba Bavuma and Hashim Amla. Chasing a deficit of 241-runs, Australia managed to put on a brave face with David Warner and Usman Khawaja steadying an almost submerging sink. Warner, deputy to Smith batted well but as the case has been, got out after making start. Warner’s inability to make runs has been a major factor in Australia’s losses, with no run on the board their bowlers have been behind the eight-ball always. ALSO READ: Australia vs South Africa, 2nd Test: Steven Smith says, he is embarrassed with series loss

Smith once again, showed maturity and competency to bat under tough conditions. Smith remained the driving force of the team when every other person had given up on even trying. Irresponsibility on part of Adam Voges, Peter Nevill and Joe Burns to score 20-50s have bite the team many times in the past few matches. Lack of proper cricket during off-season is one reason why Australia suffers from so much laziness and competency.

Past laurels have been praised while selecting the team for the future which is wrong and unfair to every other player who keeps on churning runs or snatching wickets. Australia team has been plagued with groupies’ in the recent past, which is real cause of concern because then one plays for himself rathe than playing for the team or his members.

Lack of team spirit and harmony in the group can filter in quickly especially when the team is going through a winless-phase. As skipper of the ship Smith will be lambasted for such shambolic performances but he alone is not to be labelled as a criminal. As for their cricket teams’ welfare is to discuss, it is all about how the players’s exhibits itself in times of adversity; knowing the Australian DNA, they for once will bounce back in times to come but not without harder decisions, and surgical motivation being placed into its players. 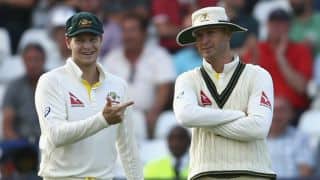