Slow over rates are cited as one of the factors that put people off attending Tests.

The MCC World Cricket Council suggested on Tuesday the introduction of a shot clock in Test cricket in a bid to speed up the five-day game.

Slow over-rates have become an increasing problem in Test cricket, with claims that the sedate pace of that form of the game is becoming less attractive for fans.

International Cricket Council (ICC) statistics from May 2018 show that over-rates in the last year were the lowest in the 11 years they had been measured. While the MCC council acknowledge that the introduction of the Decision Review System (DRS) was partly responsible for this, they believe a number of measures could be brought in to speed things up. (READ: Virat Kohli unhappy with DRS decision against Ashton Turner)

The shot clock is one of those suggestions, with the MCC statement proposing: “A timer, to be shown on the scoreboard, to count down from 45 seconds from the call of ‘Over’. (This would be increased to 60 seconds for a new batsman on strike and 80 seconds for a change of bowler).

“If either side is not ready to play when the clock reaches zero, they would receive a warning, with further infringements in that innings resulting in five penalty runs being awarded to the opposition.” (READ: 86 per cent of fans prefer watching Tests compared to limited-overs cricket: MCC)

There would be a similar timer used at the fall of a wicket, while proposals to speed up the DRS process have also been put forward.

“During DRS reviews, the standard protocol should be cut short as soon as the TV production team is aware that it will be not out,” the statement read.

A further proposal is for Test cricket to implement the rule used in white-ball cricket where a no-ball is followed by a free hit for the batting side. 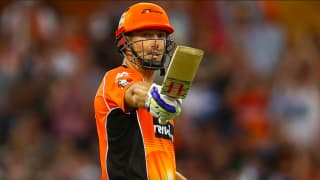