Kohli was referring to the call that came against Man of the Match Ashton Turner, who was on 41 in the 44th over.

India captain Virat Kohli voiced his discontent with the Decision Review System (DRS) that went against the hosts during a crucial run of play in the fourth ODI against Australia at Mohali on Sunday. (ALSO READ: Turner blasts 84* to power Australia’s record chase)

“But the DRS call was a bit of surprise for all of us and it’s becoming a more of a talking point every game, it’s just not consistent at all, that was a game-changing moment,” said Kohli in the post-match presentation.

Kohli was referring to the call that came against Man of the Match Ashton Turner, who was on 41 in the 44th over. Rishabh Pant appealed for a caught behind off Yuzvendra Chahal and forced his skipper to go for a review which India went on to do. The snickometer showed a spike as the ball passed the bat, but it had shown spikes even before the the ball reached the batsman as well. The third umpire Joel Wilson decided that there wasn’t enough evidence to overturn the on-field decision. (ALSO READ: Ball-tracking under scrutiny after Aaron Finch s lbw dismissal)

“There were a few close calls and I know that I didn’t nick that one. That went upstairs, my heart raced a little bit when I saw it on the big screen,” clarified Turner in the post-match presentation. (ALSO READ: Plan was to take the game as deep as we could: Aaron Finch)

India were left surprised when a DRS call taken by Usman Khawaja (on 85 in the 31st over) for LBW was overturned and went in favour of the tourists.

Khawaja, who missed to register back-to-back centuries by nine runs, was give out lbw after attempting a sweep against Kedar Jadhav. (ALSO READ: We were sloppy in the field and should’ve grabbed our chances: Virat Kohli)

Jadhav s wide-angled approach probably might have played a part in the ball-tracker showing the ball to be missing the leg stump, but India and Kohli were not amused. 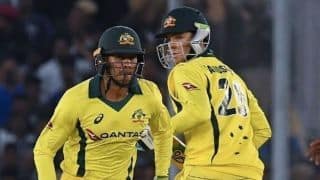 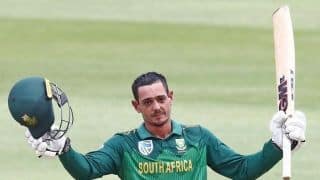